Hello! I have had a busy few days, well Monday wasn't all that busy but Tuesday was. Did you all have a good start to the official summer holidays? I spent Monday fairly relax, John cooked me a nice breakfast/lunch since we didn't get out of bed till almost 12! We did a quick shop for alton towers basically pro plus, energy drinks and sweets! Haha. No wonder I'm getting fatter! I then spent the night at the pub with Beth, Harry and Tom since John was working. We then headed to mine around midnight and then awoke at 5:50am to get ready to head off to Alton Towers on Tuesday! 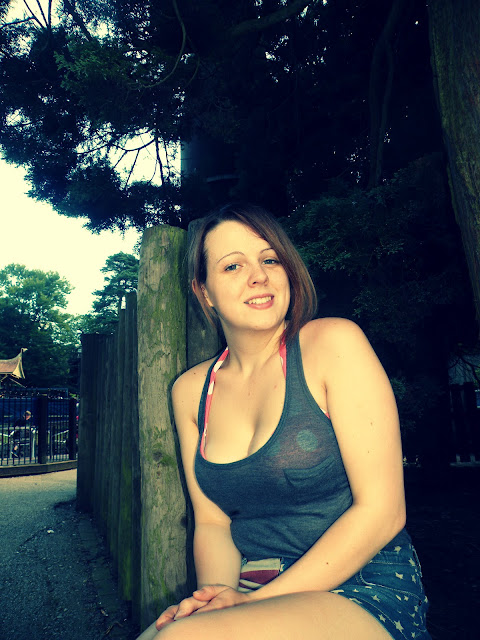 Alton Towers was absolutely boiling hot, we got there about 10am and took the 2mile walk or however long it is, its bloody long in the heat like to get into the park where we didn't queue long at all surprisingly! The first ride we went on was the River rapids of course so we would cool down. It was around 30 degrees C for the whole day! Can you imagine it in England! Haha marvellous. So I apologise for looking absolutely awful on these photos but it was just so hot and sunny so I look sweaty and scruffy and squinty haha. 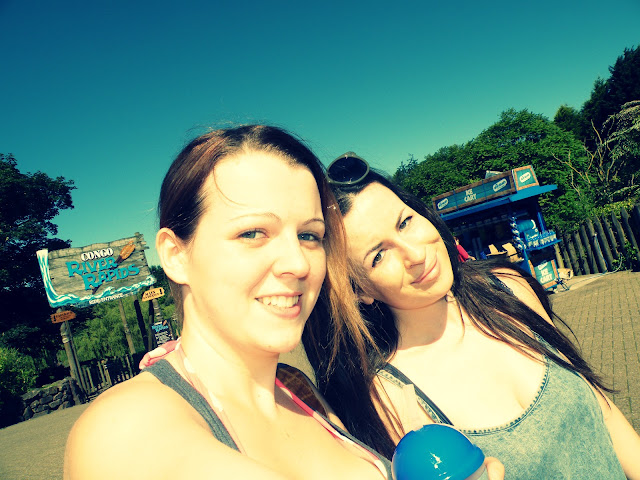 me and the wonderful beth 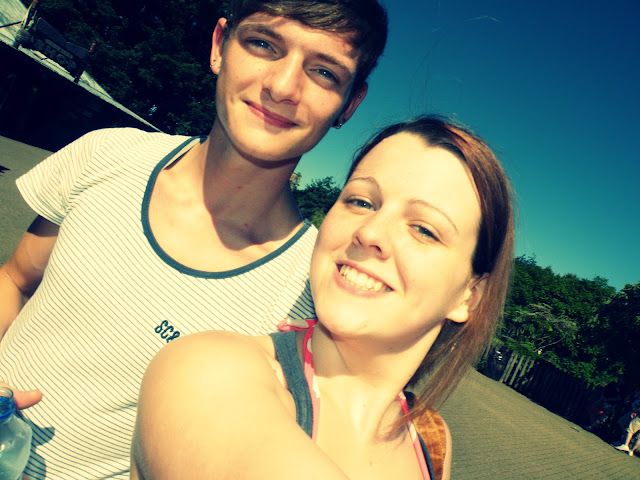 Me and Harrison he's like mine an John's adopted child at college. 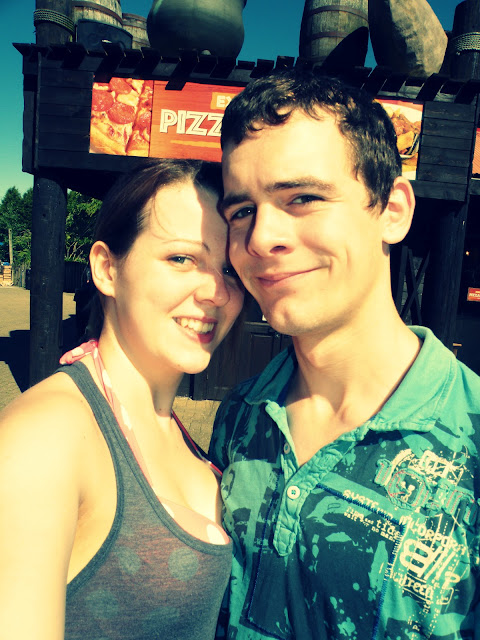 Me and John. So we pretty much walked every inch of the park we went on nemesis which after about 5 years is still my favourite roller-coaster. We had some lovely chips for lunch and then got stuck on Blade haha, it broke down just after we got on so it wasn't high up so we could climb out. We then walked back to Mutiny bay to go see the fish in the Aquarium. John and Harry go for a wee and what happens? The fire alarm goes off, John comes out about 2 minutes after, Harry is no where to be seen. Someone had to ask him to leave due to the alarm haha! Poor harry. But on a plus here are some photos of fish! 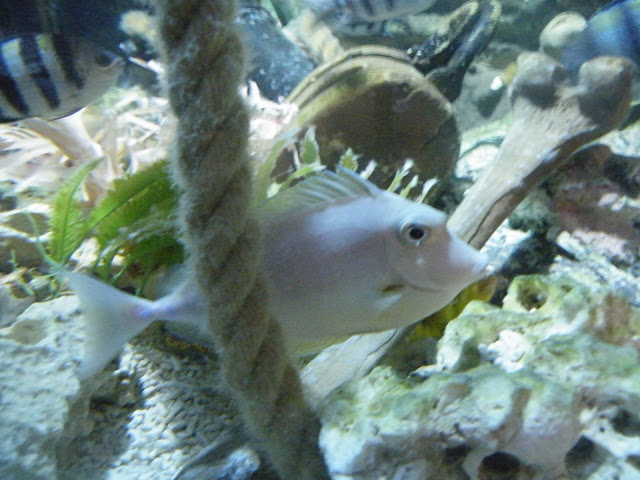 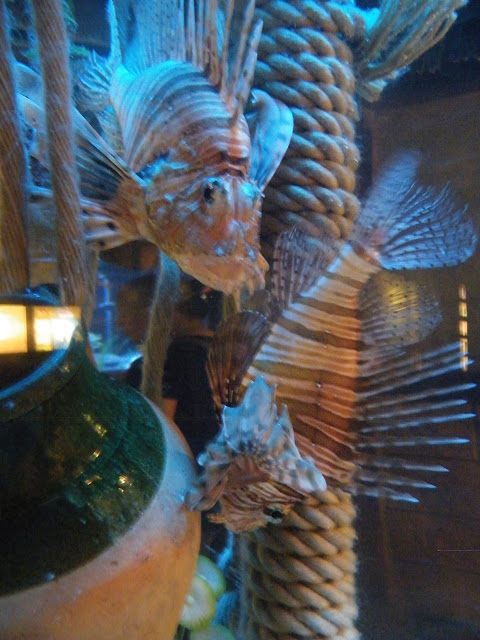 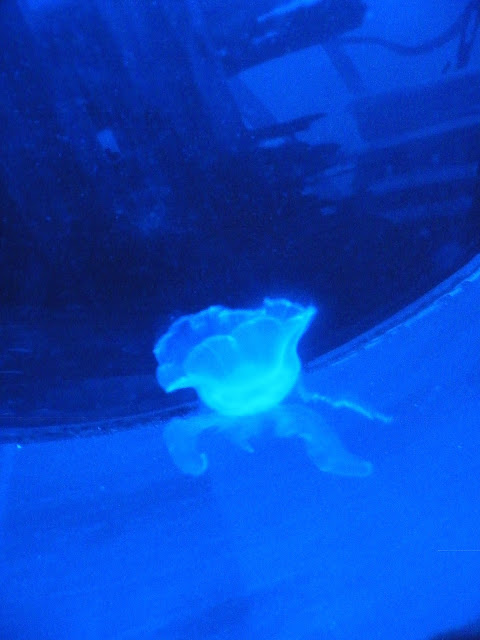 I got a lovely mini shrimp manicure in the Aquarium mind! We then made our way towards Oblivion and enterprise (me and John missed that one out) Here is John, Beth and Harry on Oblivion, my photo skills are fab haha. John looks terrified bless him. 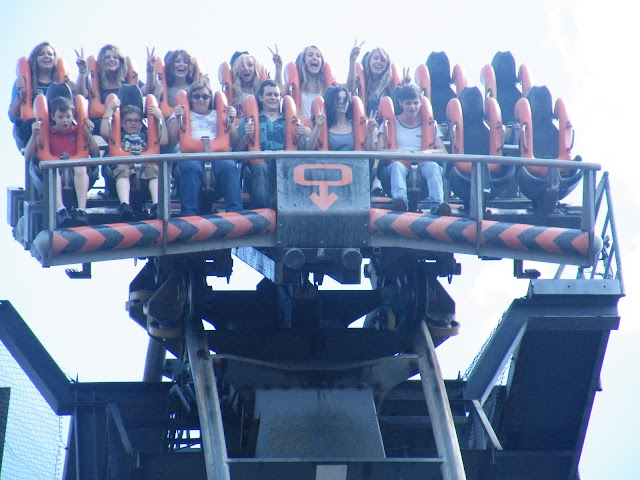 We also went on Thirteen, Oh my god. I actually shit myself. I don't do 'scary' 'haunted' 'ghost' 'dark' rides very well. I blame my father when I was about 6 years old he took me in a walk around haunted house and since then I've been terrified seriously. I can't even go on a silly ghost train my knees just knock at the thought of it. It sounds silly but I really think he scared me so much taking me on one at the age of 6 that I can't handle them now. I was almost crying coming off 13, even just standing in the queue when the creepy girl voice was counting and that god. It was awful haha. I'm such a wimp. 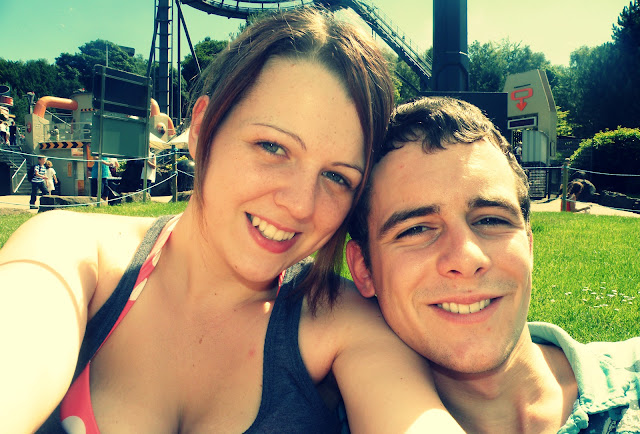 Have a wonderful squinty photo of me and John. I actually love him so much its unreal. He bought me a new Giraffe too, to add to my little collection so now I have a family. Look at the cut little thing! It has magnetic hands too! 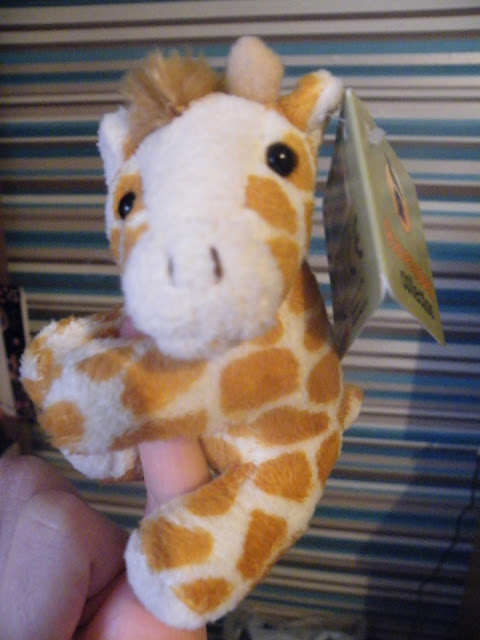 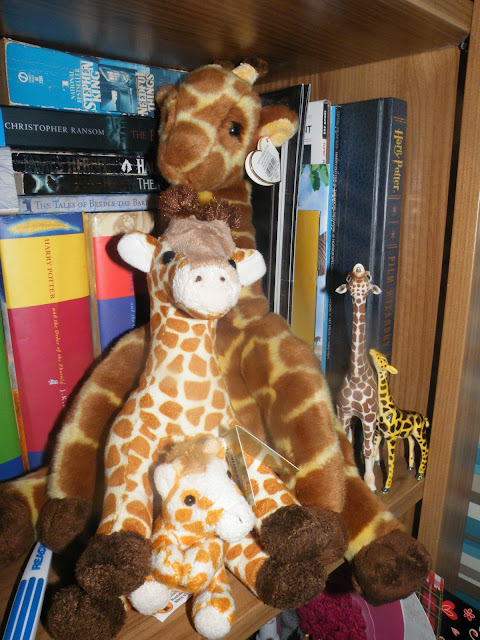 I had an absolutely fab time, but today my feet are dead. Seriously I have a giant blister under my toes on the bottom of my foot so I can barely walk on it. Painful as anything! But here is a final photo from the day, taken as we went into the aquarium, we think it's hilarious since John and harry look like a couple! 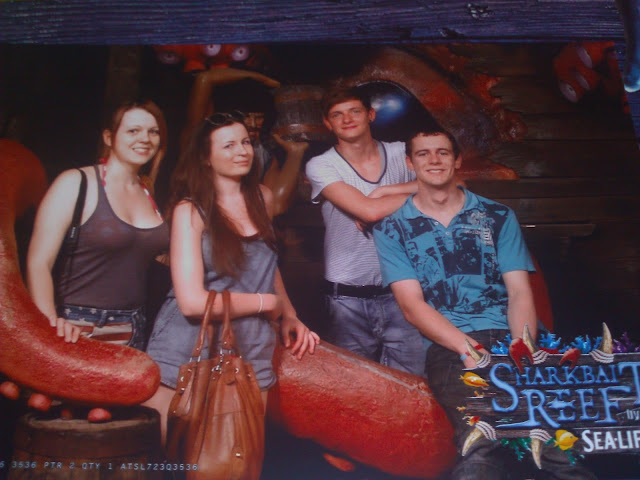 So the day pretty much went in a blur of roller-coasters, sunshine, suncream and laughs. I personally say it was a day to remember, a good day. I really enjoyed it was extremely tired by the time we got home after 10pm mind. We did stop off in Manchester on the way home though to see John's grandparents since it was granny Margaret's birthday. I love her she's hilarious!
So that has been the past two days, I must get some sleep now though, I need catch up on it after Tuesday's wake up call. Cheerio! Hope you're all having a fab summer so far!