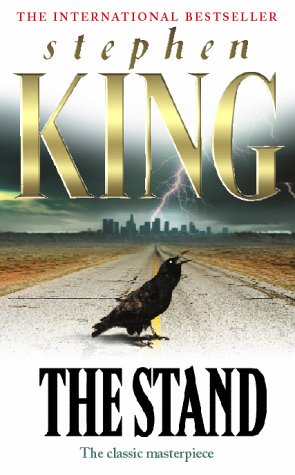 The Stand - Stephen King.
Synopsis:
When a man crashes his car into a petrol station just north of Arnette, he brings with him the foul corpses of his wife and daughter. He dies before the reaches the hospital, but it doesn't take long for the appalling plague which killed them to spread across America and the world. It is a long time before  a few stunned survivors emerge, slowly and painfully, to build a new world.
But now the dreams start. Dreams that forewarn the coming of the dark man and the strengthening of his empire. His eyes pierce the night. Surely he's the apogee of evil, warlord of the charnel house, prince of torture and death. An ancient woman struggles against the force of evil. But is it by chance that the work of the trashcan man, the Pyromaniac, even out the odds? Who is manipulating these people? What powers and forces are behind this horrifying Armageddon where ordinary people are caught in a titanic struggle between good and evil?

First of all do not read this if you have a cold or the flu. I was convinced whilst reading it that I was going to die because I developed a cold half way through the 3rd chapter. The Stand is thought of as King's Magnum Opus, I have to say it an outstanding piece of work. I couldn't for the life of me put it down, unlike IT which I previously reviewed (you can read it here), The Stand is not as scary in some ways because it does not focus on what could be hiding in the dark as much as IT does. To me the terrifying aspect was the plague because something like that could happen and wipe the human race out, the Spanish flu killed enough! The Stand is Kings 6th novel and is classed as one of his best.
The story is split into three sections the first of which being 'Captain Trips'. This starts the story off with the man-made super flu virus known as Captain tips has got out and is spreading across the world, killing an estimated 99.4% of the world's human population. You see the breakdown of society and the death of pretty much the entire population through the eyes/perspectives of multiple main characters. You feel for these characters and their emotional toll which they are learning to deal with since they as a survivor much care for their loved ones.
The section of the novel is known as 'On The Border' this focuses on the small amount of survivors primarily in the main three different parties. You follow them on their Cross-country voyage, these stories intertwine but the characters do not known of each other, yet. Eventually after many chapters switching between parties they are drawn together through circumstance and their dreams which they have all shared. These dreams involve a 108 year old woman known as Mother Abagail, they think of her as a refuge and as a representation of good in the struggle of good vs evil. They eventually end up in Colorado where they try to start a democratic society. Meanwhile other survivors are being drawn to Vegas, by Randall Flagg, he's the opposite of Mother Abagail an evil being with supernatural powers, he represents the Enemy. This group are able to reorganise their society and restore the power to Vegas and are able to rebuild the city. Within this you begin to worry for the characters that you have grown fond of during their travels and hardships, you hope everything with be ok with Fran and the baby and you will be hoping that several characters change. Spies are picked and sent across to Vegas but will they return with news or die fighting evil?
The third section is known as 'The Stand', this is where all comes to all the final confrontation between good and evil that has been brewing for hundreds of pages. Along the way there are hitches and many problems that are faced, is it not enough that the flu has wiped out the majority of the world but now the survivors must battle evil? Frans baby is due to be born, will it survive and be immune to the flu meaning life can go on or will it lack immunity and die meaning life can't continue?

Throughout the entire thing you're on the edge of your seat, some parts have your heart racing and then for a few chapters you can relax a little and then BAM king does it again gives you a mini heart attack! I think it is a fantastic book, it really gets your mind going and you get really attached to the characters because well everyone else is dead. It is an absolutely fantastic novel, I've recommended it to loads of friends, all of which have enjoyed it but have developed colds whilst reading it, maybe its a psychological thing? Either way its a brilliant book well worth a read, its not a full on horror more supernatural and sci fi. Oh and did I mention King got the idea for this from Lord Of The Rings? Which is one of the main reasons I read it.

Stars out of 5? ★★★★★
Feel free to leave your opinion on the book in a comment and I'll happily reply to any questions too.
I hope this review has made you think about reading The Stand.
Kloe x