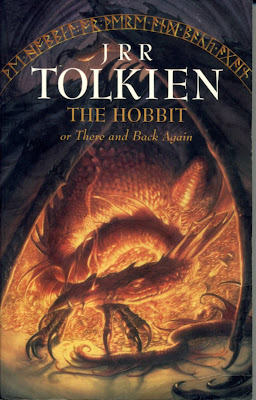 Now I think most people are familiar with the work of Tolkien and Lord of the rings. Well this is the story of how Bilbo Baggins got the ring. I read the first lord of the rings 2 years ago just after I started college, I never finished the second one and hadn't even finished the films. I had every intention to because I just loved the first book but I got wrapped up in other books and college and completely abandoned the books. When I started going out with John he expressed love for Lord of the Rings and tried to get me to watch them many a time and I refused because I hadn't yet finished the series. I did though in May let John put the first one on and ended up watching them all. This time around though I decided I'd start at the beginning and read the Hobbit before the others. (I say I'll do things and do them about 3 months later.) So I have now read the hobbit and I'm almost finished the first lord of the rings again! So lets begin.

The Hobbit, -J.R.R. Tolkien
Synopsis:
Smaug certainly looked fast asleep, when Bilbo peeped once more from the entrance. He was just about to step out onto the floor when he caught a sudden thin ray of red from under the drooping lid of Smaug's left eye. He was only pretending to be asleep! He was watching the tunnel entrance!
Whisked from his comfortable hobbit-hole by Gandalf the wizard and a band of dwarves, Bilbo Baggins finds himself caught up in a plot to raid the treasure hoard of Smaug the Magnificent, a large and very dangerous dragon... (1993 edition blurb)
The Hobbit is a tale of high adventure, undertaken by a company of dwarves, in search of dragon-guarded gold. A reluctant partner in this perilous quest is Bilbo Baggins, a comfort-loving, unambitious hobbit, who surprises even himself by his resourcefulness and skill as a burglar.
Encounters with trolls, goblins, dwarves, elves and giant spiders, conversations with the dragon, Smaug the Magnificent  and a rather unwilling presence at the Battle of the Five Armies are some of the adventures that befall Bilbo. But there are lighter moments as well: good fellowship, welcome meals, laughter and song.

Now if you enjoy the films and haven't read the books, you should. The Hobbit was really enjoyable, much more upbeat than Lord Of the Rings is. The story starts off with Bilbo being tricked by Gandalf into hosting a party for a bunch of Dwarves. These dwarves want to reclaim the Lonely Mountain and its mountains of treasure from the dragon Smaug. Gandalf proposes that Bilbo should be the expeditions 'burglar', the dwarves find this amusing and ridicule the idea which leads Bilbo to join them even though he doesn't want to. You can imagine the adventure, a hobbit, a group of dwarves and a wizard in the wild meeting trolls who want to eat them, elves and goblins. Gandalf ends up saving the hobbit and dwarves in most of these situations although Bilbo becomes an unlikely hero type. During these adventures Bilbo comes about a magic ring and meets Gollum who the majority of you will have heard of. Biblo soon learns that the ring can turn him invisible which he uses to his advantage many a time when the group are in trouble saving the dwarves on countless occasions. When they eventually reach the mountain there is still trouble to be had, of course they never thought of what they would do to the dragon Smaug! All seems to end well and you think 'why is there about 80 pages or more left?' then you realise there is going to be a battle over the treasure in the mountain. Of course we know that Bilbo is fine in the end because he has his hobbit hole and the rings and adopts Frodo in Lord of the rings! But that still doesn't stop you worrying about him.

I found this to be really enjoyable, a great book to read when winding down, it took me awhile to read it but I was only doing half a chapter a night.
Along the journey we meet many characters and creatures and visit many a town or settlement. There are troubles and laughs and it's just a really good adventure. I'd recommend it to those who are fans of the LOTR films, those who fancy a little adventure and those with children.

Stars out of 5? ★★★★
Feel free to leave your opinion on the book in a comment and I'll happily reply to any questions too.
I hope I have made you think about reading the Hobbit and finding a sense of adventure.
Kloe x