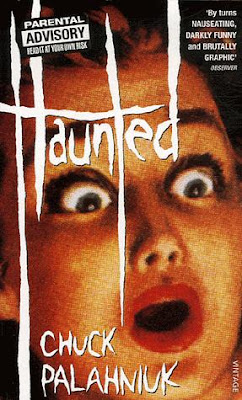 Synopsis:
Haunted centres around a group of seventeen individuals, who each have nicknames based upon their stories. The seventeen individuals are taking part in a writers retreat after noticing an invitation to the re-treat posted on a cafe bulletin board, the characters follow the instructions given and head for the retreat. The book takes form of 23 short stories each are introduced by a poem which identifies the writer of the following story, between these they are all linked by short narratives which tells us of how the characters are coping in the writers retreat.

I can't really say much more about it without giving it away, I will say one thing though that this novel is not for the faint hearted. One story known as guts is notorious for making people throw up or want to pass out, personally I found it a bit of a shocker but not as bad as I expected it to be after hearing loads about it, if you can't be bothered to read the whole book or are just interested in seeing why people have passed out over it you can read the short story guts on line here. I decided to read this because many people had been going on and on about how good it was and how it made you think along with how disgusting guts was so I thought why not I need new reading material. So I downloaded it to my kindle and set about reading it, at first I was a bit apprehensive of what it would be like, I'd never read a Palahniuk novel before but I've read many somewhat shocking books since I'm a horror fan. This book was fantastic though, I couldn't put it down Palahniuk keeps you trying to guess at what the characters are going to do next or what they are like underneath it all, most of all he makes you think about our way of life and how we love drama. The book was full on constant suspense and a who's stories coming next and what will happen? It was a really intense read, I loved it. You just can't predict what's going to happen next.

This book is a fantastic read for anyone who wants something a little different, I wouldn't class it as a horror but as a suspense thriller I'd say. I really enjoyed it and it really made me think about human life and the way we live it. It made me think of all the drama we cause ourselves. It really makes you sit for a moment and think about life, the stories within the book also provoke your thoughts too. You just don't know what'll happen next. I'd thoroughly recommend it to anyone who wants something a bit different to read.

Stars out of 5? ★★★★★
Feel free to leave your opinion on the book in a comment and I'll happily reply to any questions too.
I hope this review has made you think about reading Haunted.