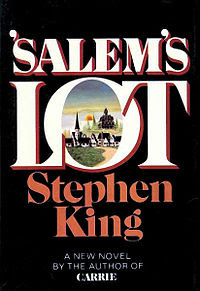 'Salem's Lot - Stephen King.
Synopsis:Thousands of miles away from the small township of 'Salem's Lot, two terrified people still share the secrets of those clapboard houses and tree-lined streets.
One is an eleven-year-old boy. He never speaks but his eyes betray the indescribable horror he has witnessed.
The other is a man plagued by nightmares, a man who knows that soon he and the boy must return to 'Salem's Lot for a final confrontation with the unspeakable evil that lives on in the town where no one is human anymore.

In recent years vampires have become sexy creatures of the night that socialise, enjoy human company and can control hunger even when they are new born. Forget everything you've read about vampires recently,these vampires don't sparkle in sunlight or drink animal blood, they burn in the sun and live off humans. They aren't sexy and have constant sex with their food, they just want a good meal. They don't sugar coat what their doing and make it seem alright they just want to feed. They're not nice at all, they don't socialise with humans unless they want to feed or to taunt them. Oh and they are very very clever. Oh the love I have for this book can't even be put into words, as everyone was getting into twilight I was reading this and getting into King. The first book I read of his and it will forever be my favourite book ever. I remember everyone going on about how amazing Edward Cullen was and thinking oh I wish you would read this book about vampires. The book is fantastic, so many twists and turns and I love the way king writes it. The little bits on other peoples doings in the town along with the main characters, the little bits of history on the town. Oh he's just brilliant, in my opinion this is his best novel. It's creepy and wonderful and makes you think about those bumps and creaks you hear in the night and what could be lurking in the dark. Not even kidding the first time I read this, I didn't dare sleep because I heard a noise like rapping at my window and decided to make a crucifix out of my ice lolly sticks, and blessed them. It was a mix of the book and being up for 24 hours but then after sleep I was still freaked out. Even now after I've read it hundreds of times I still find myself holding my breath and jumping if someone speaks to me whilst I'm reading it.
Don't under estimate this book and think its just another vampire story because its not and don't think oh I'll watch the film because it was made in the 70s and is rather hilarious to watch. It's a fantastic book all vampire fans should read and all Stephen King fans too. If you fancy something with a bite and not your current vampire novel give 'Salems Lot a try and I promise you, you won't regret it.


Stars out of 5? ★★★★★
Feel free to leave your opinion on the book in a comment and I'll happily reply to any questions too.
I hope this review has made you think about reading 'Salems Lot.