From Hell It Came! The Twins of Evil...

On Tuesday I set off to see two of my favourite artists, Rob Zombie and Marilyn Manson. After several  hours in the car we eventually made it to Manchester, where there was slight problems with the tickets but that was soon sorted. We had seated tickets, which I won in a competition hosted by Scuzz Tv, most people may have been disappointed by seats but we didn't mind because my dad's ill at the moment so it was perfect. 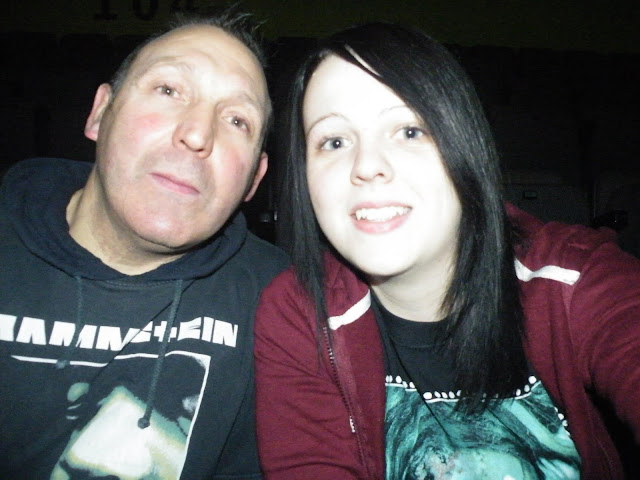 So we got there around quarter past seven, Manson was due on first at 8pm and then Zombie, me and dad devoured some marvellous Nachos and bought our selves some merch. After chatting for a bit and singing along to interval music such as slipknot and rammstein Manson eventually came on! It felt like we'd been waiting forever. These photos aren't the best but I'm a midget and then we were seated but they were good seats, no way would I have gotten close to the front had we been stood. 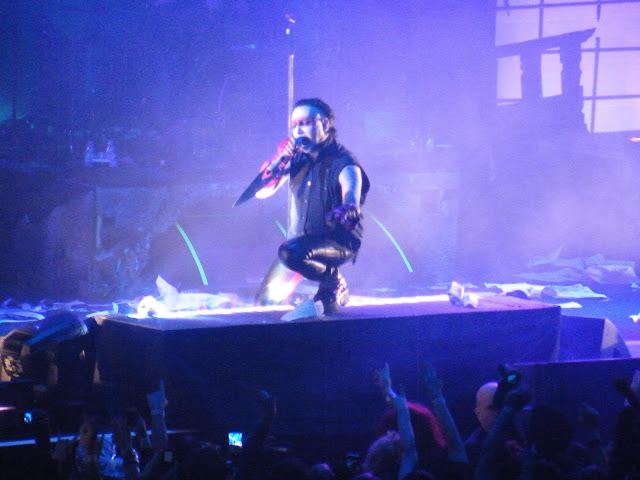 So lets begin, I love Marilyn Manson, I've been wanting to see him since I was about 13 years old. I was so excited, I thought I was going to vomit. Sadly Manson isn't one of them acts that sounds similar to he does on track. I'd already heard many people say he wasn't that good and he was a diva and prepare to be disappointed but I didn't want to believe these people because I love Manson so much that I couldn't accept that he'd be poor live. 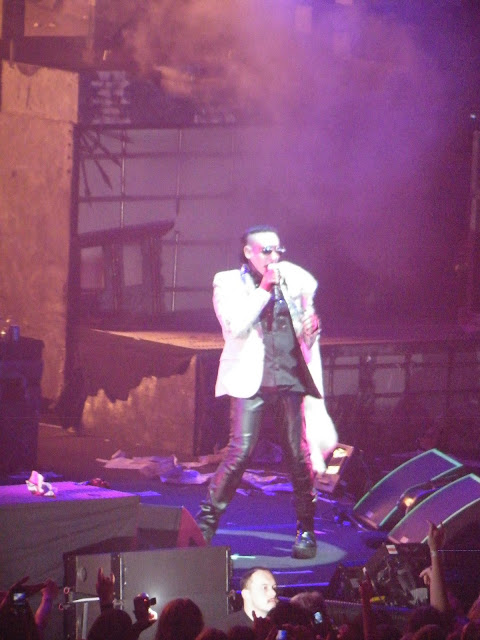 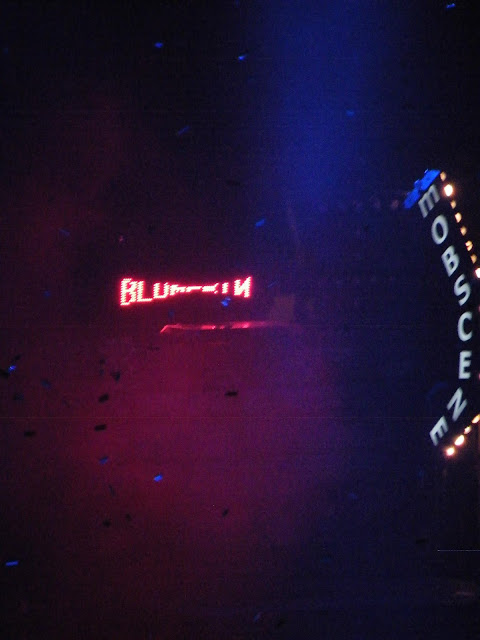 I'm saying he was so awful that no one should ever see him but he didn't really seem altogether there and a lot of the crowd didn't seem to be feeling him, some songs were fantastic others not so. I think the problem was he didn't speak to the crowd much, artists need to have a connection with the audience. 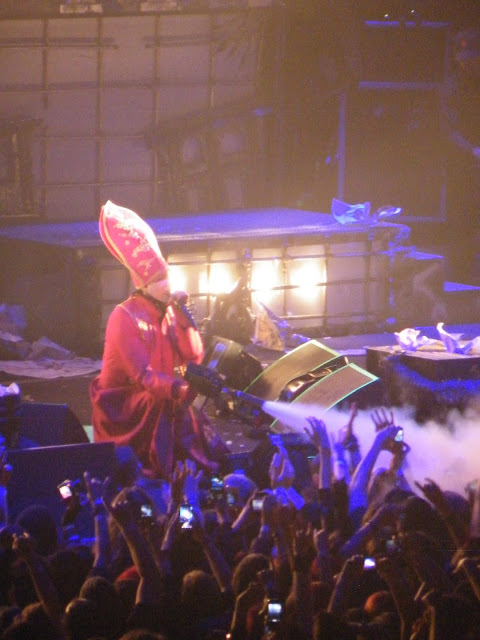 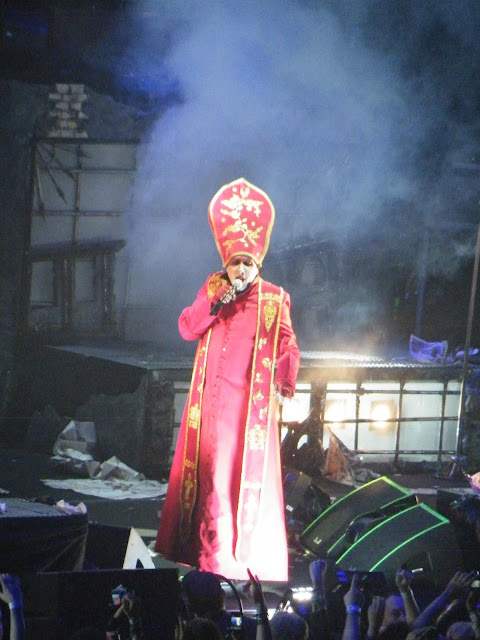 There were many wardrobe changes during the show and many new sets brought out, each made you consider what song made be coming up. The outfit above my favourite, I thought it was brilliant, although his fur coat was amazing. He belted out hits such as mOBSCENE, The Beautiful People,  No Reflection, Sweet Dreams and Coma White to name a few. 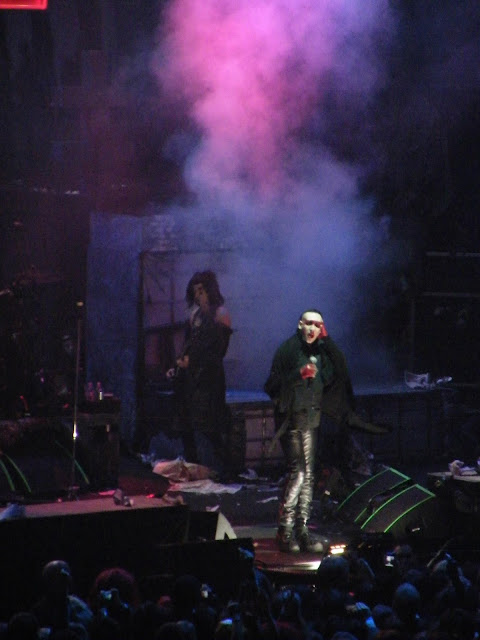 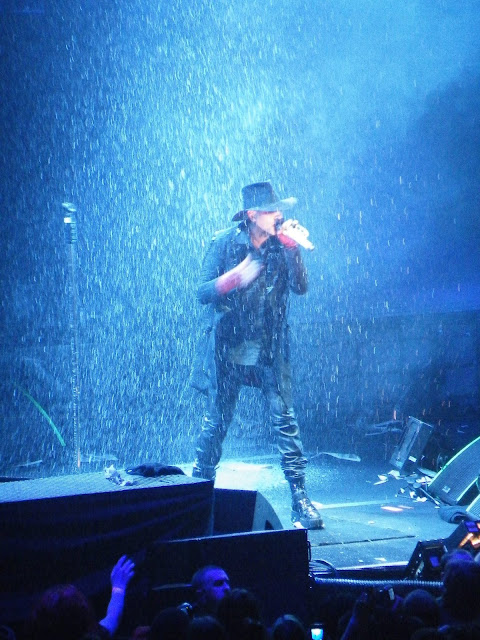 Really Manson was worth a watch but I'm still not completely sure about how I feel about his singing though, although some songs were amazing live others I prefer on track, but I guess that goes for most artists doesn't it. Marilyn Manson is worth a watch but if you want someone who sings live like they do on track, Manson may not be the one. But the show was entertaining, don't give me abuse though for telling the truth, I love Marilyn Manson so much and his music is amazing but I was rather disappointed, sorry for telling the truth. 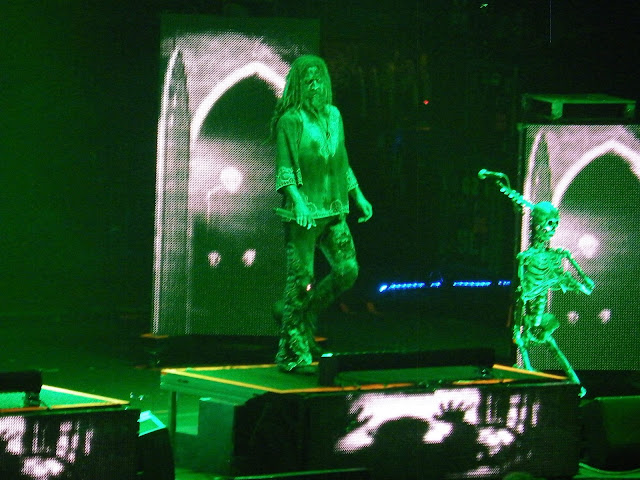 Rob Zombie on the other hand was brilliant, he's one of the best act's I've seen live. I love how he gets the crowd going. I love how he gets the crowd to really interact with him for example getting one side of the room to shout rock whilst the other shouted mother fucker! He just really gets everyone excited and to be honest he's rather amusing. 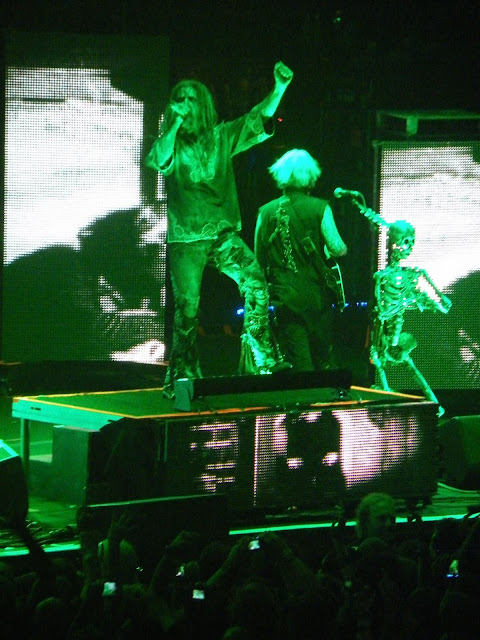 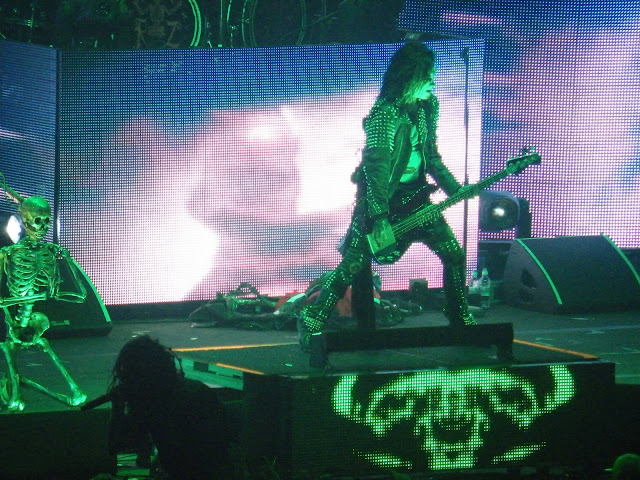 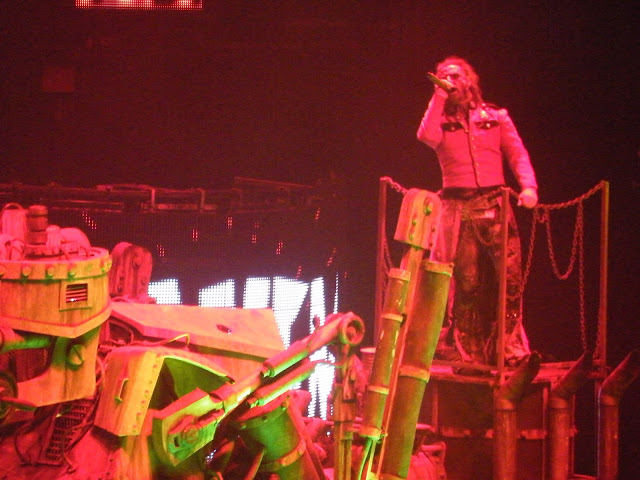 Zombie was brilliant, he sang all his classics such as Dragula, Living Dead Girl, Pussy Liquor Which is a favourite of mine, Sick Bubblegum and Mars Needs Women. What I love about his shows are the props, the mechanical props such as the robots and the giant LCD screens which show videos to go with the songs. The crowd was also treated to a teaser trailer for Zombie's upcoming film The Lords of Salem you can find the trailer here, this got the crowd extremely excited. I personally love his films. 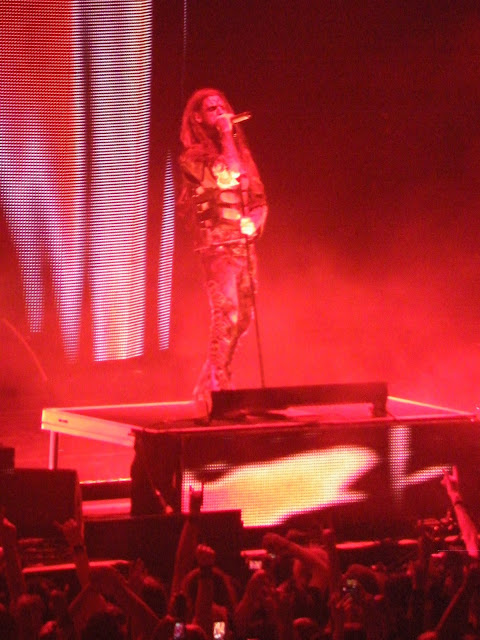 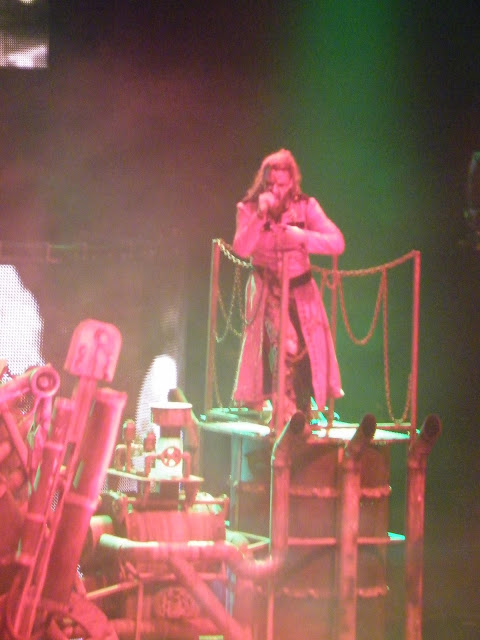 In all honesty I knew Rob would be good live because I saw him early last year so I knew what to expect but he still blew me away. He's so captivating to watch on stay you just can't not watch him. He's also really good at singing live too which is always a plus. If you get a chance to see him go for it, you will not be disappointed, he has so much energy on stage and even comes out into the crowd with his flash light so he can meet people. 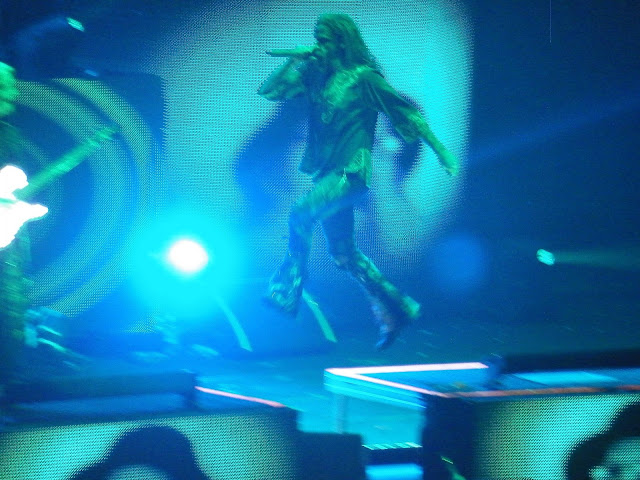 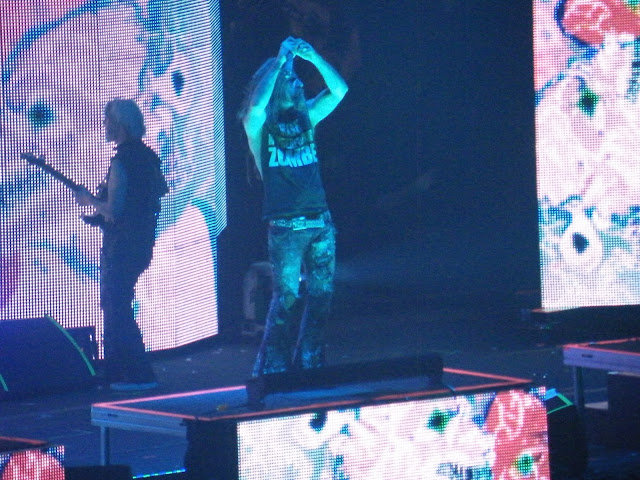 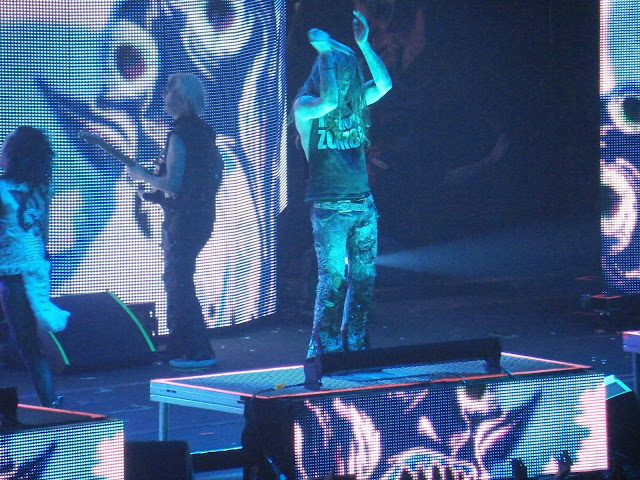 Together Rob Zombie and Marilyn Manson are amazing as one show, The Twin's of evil show could quite possibly be one of the best I've ever been to. I really enjoyed it, since I hadn't seen any bands for absolutely ages it felt like a really good welcome back and my dad really enjoyed it. Rob Zombie now has a new big fan! Such a good show with many amazing songs sung and a brilliant show was put on. If you get a chance to see the pair of them do it, you won't regret it.