So here it is the last post of the year, I thought I'd do a mass post on all the highs and lows of the year and include my favourite photos with captions to tell you about them so off we go! 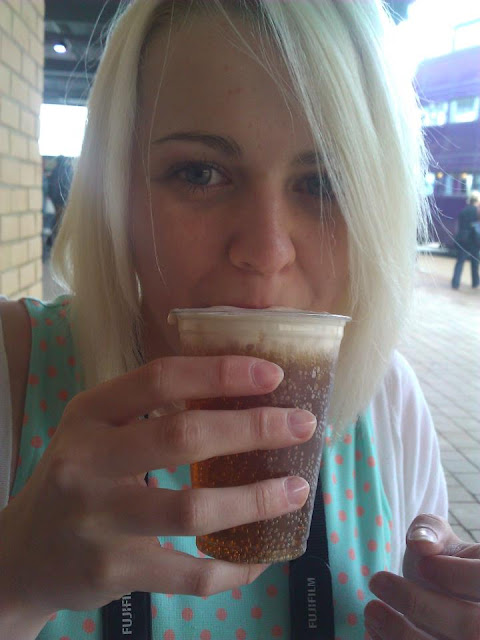 (Above; drinking butter beer at the Harry Potter studio tour in London, in April. Outfit; Mint dress from Boohoo, Caridgan from Peacocks.)
2012 has been such a mad year, its been so full of days out and new starts. This year has been a really good one with some bad parts but you can't have it all can you?
January was spent ill and on codeine so that wasn't too fun then John and I lost a friend of ours. That was heart breaking we couldn't believe it and what was worse was the last thing I'd say to him was something like 'oh fucking get a grip and stop acting like a spoilt twat' because he was constantly complaining about not having an xbox that worked or complaining about things that aren't that important. I still feel awful about this and probably will until I forget about him. I'm sorry for being awful Jamie but you just didn't seem to see what was important in life but really if it wasn't for you I'd never have gotten with John. Rest in Peace Jamie, since your funeral I have yet to have dry eyes when I watch Lilo and Stitch.
February was a bit of a dull month, not too much happened I had a few university interviews and went to see John's grandparents in Manchester. 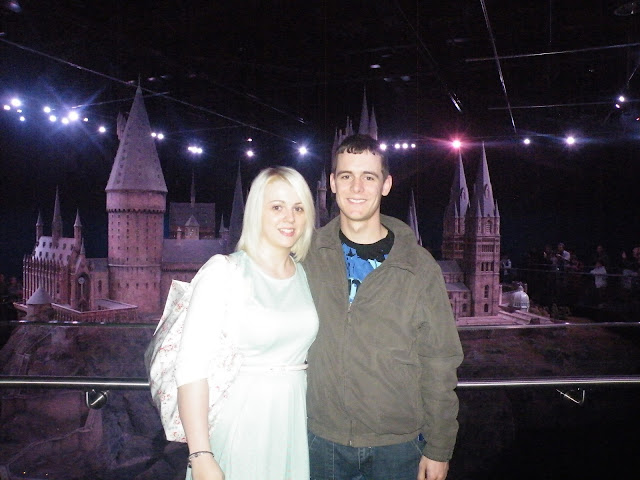 (Above; In front of Hogwarts castle almost in tears of happiness, April. Outfit; Mint dress from Boohoo, Caridgan from Peacocks, bag from Cath Kidston.)
March and April were fantastic months, oh how good they were! In March I turned 18 and realised who was important and who was not. In April John and I went on our second holiday together but our first alone. It was my gift from John and to celebrate our One year together! I couldn't believe it we've been together for almost 2 years now! We went to London and it was fantastic, the best trip ever. We went to the Harry Potter Studio tour as you can see from above I was almost crying through out the entire thing! We had dinner at Planet Hollywood and visited Laduree for their world famous Macarons oh they were glorious so nice! We had a mini shopping trip and went to see all the sites it was a fantastic trip, just what we needed after a stressful few weeks at college. 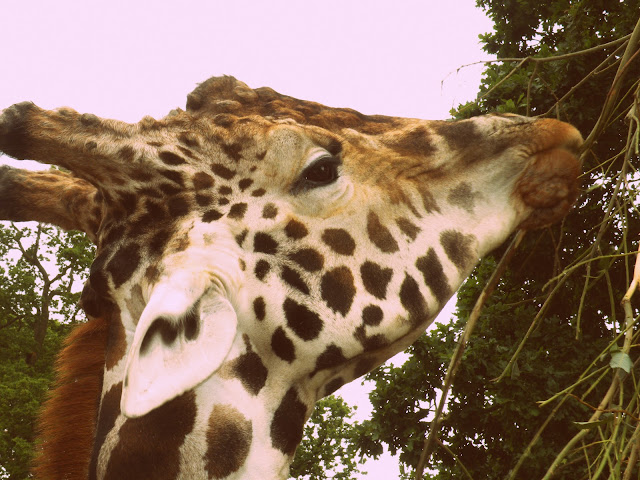 (Above; One of the Giraffes at Knowsley Safari Park.)
May and June were spent stressing out over college work and deadlines but I did it guys I got it done in time and got 320 Ucas points which made me very very happy and meant I got a Scholarship! Once college was done I ended up relaxing for a few weeks and then getting stressed out over summer holidays since we were meant to be going on a group camping holiday but no one could make their minds up! 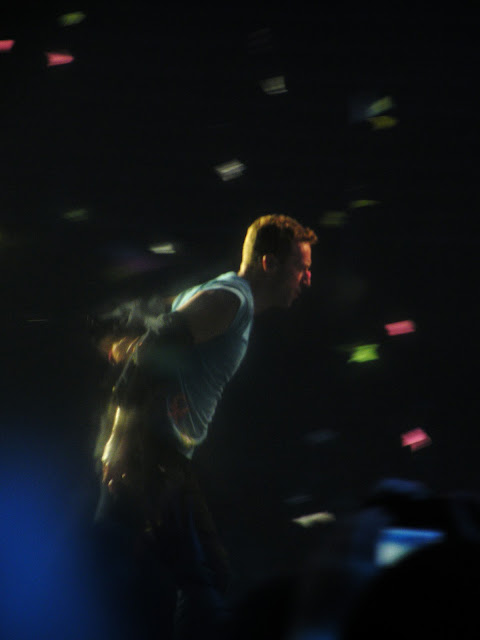 Aside from above June was also spent listening to live music well I dragged John to a festival and we went to see Coldplay at the Stadium of light. Chris Martin Pictured above (Photos used are mine taken on my camera) 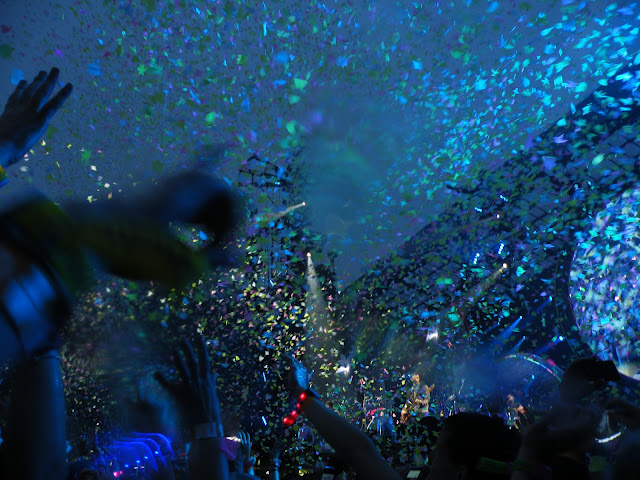 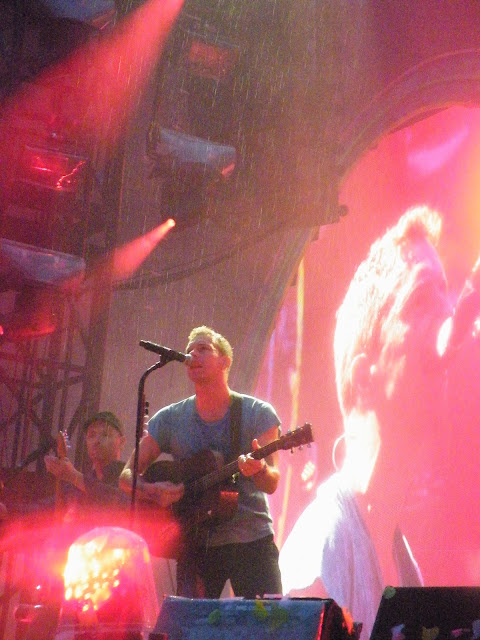 We also attended Download festival (Below) there aren't many photos of Download though because my camera was extremely soggy from Coldplay the night before and it was too muddy I didn't want to risk slipping in the mud and ruining my camera. 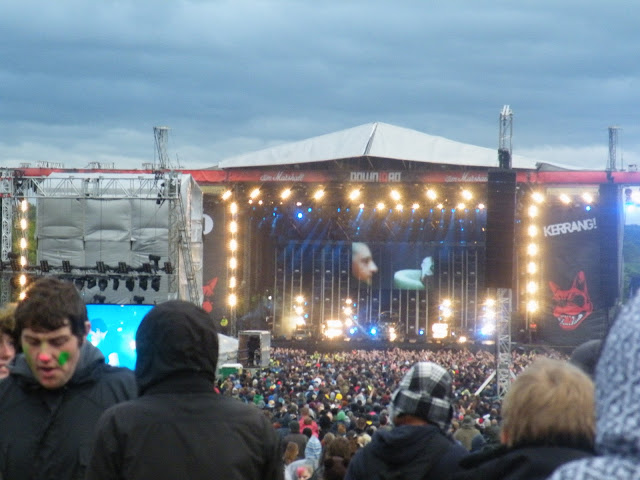 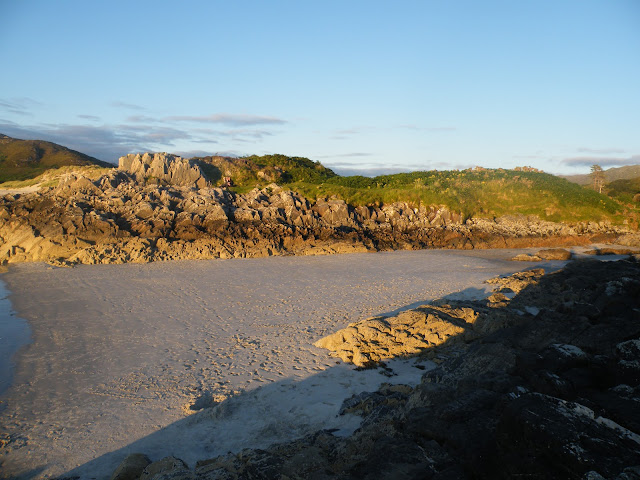 (Above;The campsite beach in Scotland, it was such a beautiful place, I can't wait to go back in the Summer of 2013.)
July and August was spent lounging around the garden, having BBQs, visiting the beach, going to the pub and visiting many places. We had trips to York, Manchester, Whitby and Scotland to name a few places. Scotland was my favourite place, it was the holiday we needed after finishing college and waiting for University to start, it was just perfect. We got tans and spent our days exploring the surrounding beaches and  enjoying some down time. July and August were also a sad month for me though, At the end of July a boy I went to school with and fancied for about 3 years and considered a good friend for 2 went missing. At first it was thought that he'd just spent the night or two at some friends house after going drinking, days pass and it was heart breaking seeing it on the news someone you used to know and only spoke to on the bus the week before was missing and no one knew where he was. He'd been missing almost a week when he was found, it was such a shock when they announced it was his body they'd found everyone hoped it wasn't his but it was. I'm almost crying typing this and I hadn't really seen him since we'd left school but whilst at school he had a massive impact on everyone, he made everyone laugh and was always nice. He had so much potential no one could believe that he was dead, I missed his funeral because of my trip to Scotland and I felt so bad, but the day of his funeral I got sunburnt extremely bad and had hundreds of midgey bites, I think it was because I missed it. He was a lovely boy and I doubt anyone around here will forget about him, he was a fantastic artist and a wonderful person. Rest in Peace Kelvin. 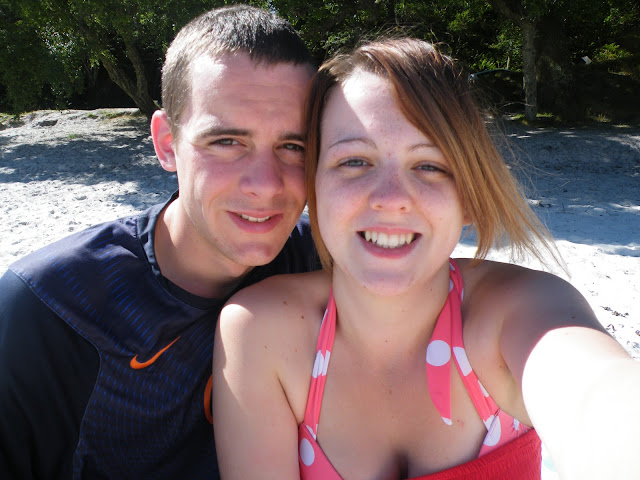 (Above; One of the beaches near Mallaig, the most beautiful beach ever white sands and clear sea. Outfit; Bikini Primark, Playsuit Primark.) 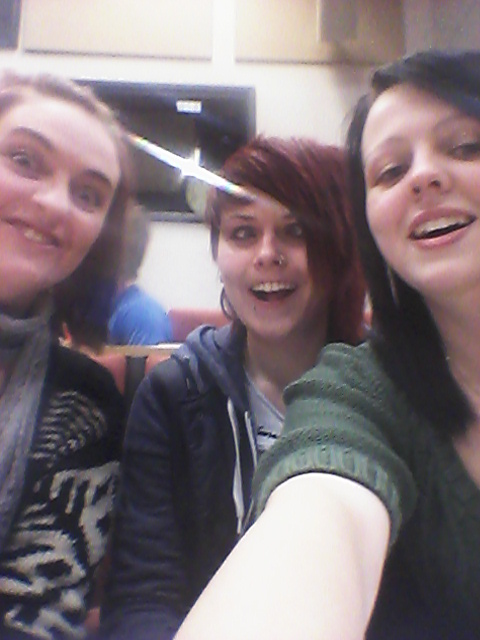 (Above; Me, Mel and Abbey during one of the most boring lectures known to man. I love these two honestly so hilarious sitting with them in a lecture.)
September and October were the months where I made one of the biggest steps in my life, I went to University! I'm so pleased I chose Teeside in the end because I met some amazing people and got a house with some amazing people and I absolutely love my course. Forensic Biology is perfect for me! There isn't much else to say, oh actually yes there is I finally met Johns French cousin and aunt, who are absolutely lovely and we booked a trip to France! I'm so excited for this words can't even describe it. I also made some pretty cool Halloween cakes and had a little party. 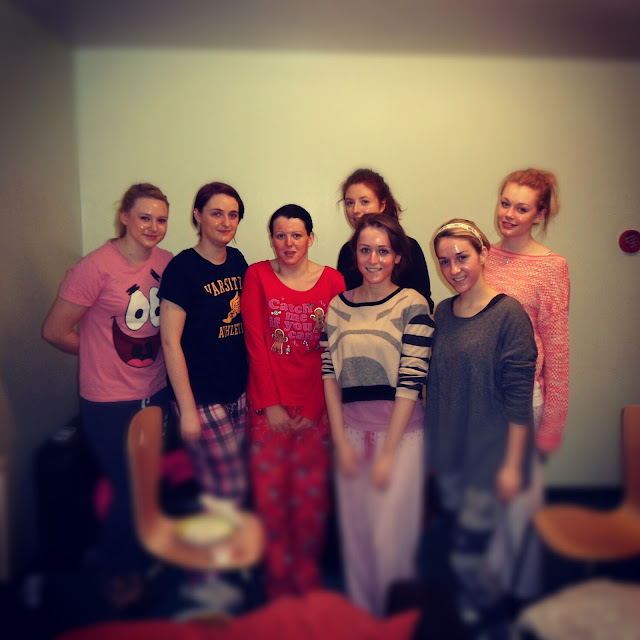 (Above; Girly night at Abbeys house with the girls from uni L-R Shona, Abbey, Me, Becca, Becki, Esther and Rosie. Outfit;Jammies from Asda.) 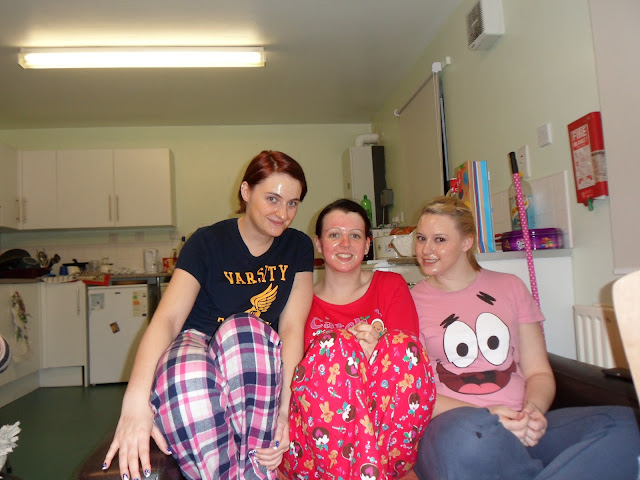 (Above; Abbey, Me & Shona, I have so much love for these two. Next year is going to be amazing. Outfit; Jammies from Asda.) 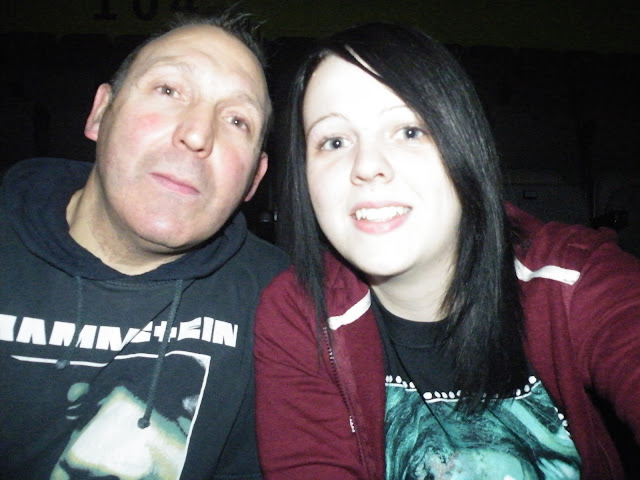 (Above; Waiting for Marilyn Manson with my dad at the MEN Arena. Outfit; Hoodie from New Look, Top from Rob Zombie merch stand at a gig in 2011.)
November and December were pretty awesome months, November I finally got to see Marilyn Manson who have been one of my favourite bands since I was about 12! I was so happy I won tickets through Scuzz and couldn't believe my luck, I took my dad as my plus one because were always gig buddies. 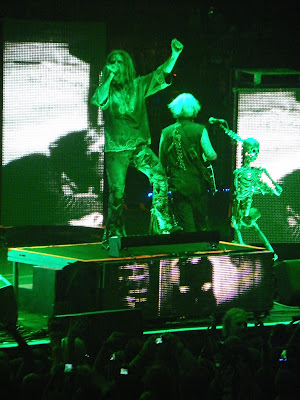 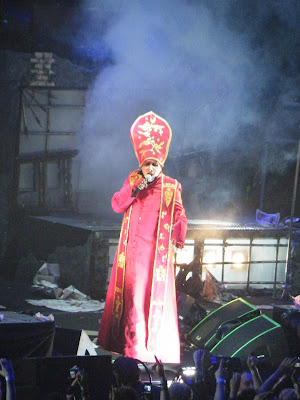 (Above; first image Rob Zombie and second Marilyn Manson from the show, taken by me.)
December was of course Christmas! Oh how I love Christmas, my sisters loved their gifts as did John and that made me very happy.  I loved my gifts I got and spent the Christmas season relaxing and catching up with Lewis and Brandon who I've missed ever so much since they moved away for uni. 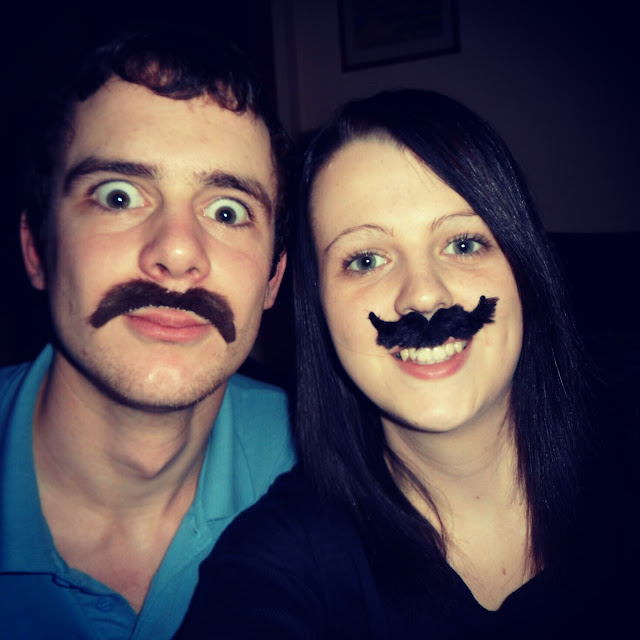 (Above; Boxing day with John, looking far too good in our tashes. Outfit;Jumper from Next.)

So what have I learnt in 2012?
Kelvin and Jamie's deaths taught me not to take anyone for granted and that I should always tell someone how much they mean to me even if I'm going to see them again in an hour or so, you never know what the future holds. Make parting words those of happiness because you don't want your last words to someone to be harsh and something you regret. Which I do. I have also learnt that I should do what makes me happy ot everyone else and that I should never lend my mother money. Here's to 2013 which is going to be a great year, fingers crossed.

What do I aim to do in 2013?
♦ I aim to blog more regularly like twice a week at least!
♦ Take more photos and take my camera with me since my phone camera is broken.
♦ I aim to at least sign up to the gym! Because I need to sign up before I go haha.
♦ Learn to ski!
♦ Pass my first year of University.
♦Let go a little and not get a stressed as I have this year over a little things.

Happy new year everyone! I hope you have a fab night / day and don't get too intoxicated! All the best and see you in the new year! x