2013 was one hell of a weird year, it feels like so much yet so little happened. I had no idea how to write this post, there was so much I wanted to write about, I'm not kidding it's taken me nearly 4 days to write this, maybe that just proves how dreadful the start of my year was ey? Anywho 2013 I'm both happy and sad to see you go, but you have been one hell of an odd year. You put me through breakups and make ups, you introduced me to new people, you let me say goodbye to others, you made me realise so much and gave me some fantastic experiences. So 2013 some think you flew over but I feel like you dragged. If I'd been told this time last year what was going to happen in 2013 I would never have believed it, but here we are. 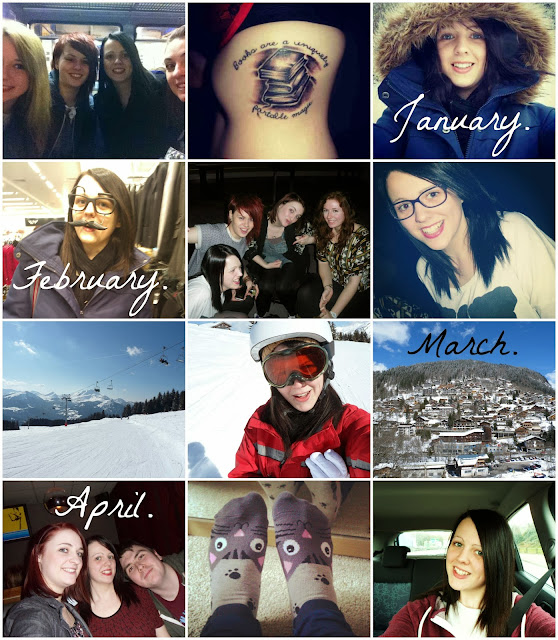 January, Oh how you were miserable, filled with snow and tears. January was filled with heartache, John and I broke up, I was pretty ill and family problems occurred. Not long after January began I wanted it to end, I wanted 2013 over, I never thought it would improve, oh how stupid I was. Of course as I began to get over John I realised what I'd been missing, I started spending more time with my friends and listened to my favourite types of music more often. I hadn't realised it up until that point that I'd been hiding parts of me whilst I was with John. January saw me get my second tattoo, I'm still as much in love with it as I was the day I got it. January was fairly bleak there's not an awful lot to say really.
February, Oh how you ended up being the start of happiness. I started February super ill, getting scans and living off codeine, I still have no idea what was up but oh well. I managed to peer pressure my best friends into buying tickets to Download Festival which turned out to be one of the best parts of the year! John and I got back together and I never thought I could be happier. (How little did I know!) February was spent pretty much back in the honeymoon period of a relationship there's not much else to be said to be honest.
March, Oh you brought me new adventures! Skiing, I never thought I'd try skiing or like but yet I did. I spent a week of March in the South of France with John's family, eating cheeses, macarons and skiing. I loved France, it was so beautiful, the mountains the snow and just everything about it. Oh how I'd love to go back. March also saw me turn 19, (I'm getting old! Eek) I had a small celebration with my friends and received my first Chanel lipstick!
April, Oh April how boring you were! Filled with revision and sleep I barely did anything and have barely any photos to document the month! I did have a trip to Manchester which is always great, but not a lot else happened. April was really just about chilling out and being poor. I did start to plan a trip to London with John in April for July. Now that was fun because you know it was something to look forward too, little did we know. The first few months of the year bar March were fairly dull, I still lived at home and didn't have anything fun planned until the summer, that's where everything changed. 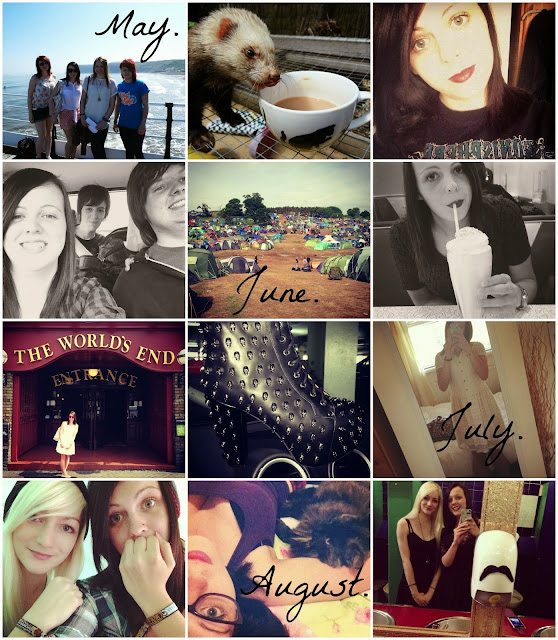 May, Oh May, you were super stressful and filled with exams and sunshine I couldn't play in. I spent the majority of may revising for my exams and getting excited about Download. By the time my final exam rolled around I just didn't care because it was two weeks until Download. May brought with it a trip to the beach and final fling which was an amazing day filled with too much alcohol and sunburn. May also allowed me to spend more time with my mam and gran due to have more days off which were spent lazing around in the garden in between revision. To be fair May was mainly spent jumping about getting excited over Download Festival haha.
June, Oh I was so excited for you to roll around! You came and went in a blink of an eye! Download Festival was quite obviously a massive highlight for June, it was my first weekend at a festival without my dad, I didn't know how I'd cope. Obviously by drinking a little bit much and forgetting to eat oh and by singing my little heart out. Download Festival you were amazing, I loved every second (aside from walking to and from cars) I saw so many amazing bands and made me realise what and who was important in my life, I realised how amazing Sam, Brandon and Lewis were and I can't be happier for it. Oh and I had my first Blogger Social which was super exciting. June also brought with it new people, I'm so thankful I met the people I did, I wish I could tell them how happy I am that I met them but that might freak them out. But the friends I made, they are amazing, I can't thank them enough for making me realise how unhappy I was and how much I'd changed myself.
July, Oh how you didn't turn out how I expected you to July! July 1st saw mine and John's relationship end for the final time (there's no going back, I'm sorry.) So that put our London trip out the window didn't it? Well I had a sneaky plan (oops.) I ended up heading down to London with a friend instead, which ended up to be a better day than I had expected. I got to visit Camden and London Zoo what more could you ask for? July was such a happy month, I got my first pair of Lita's aren't they beautiful? And I also got my nose pierced at long last! July also saw me take a trip to Lincoln to visit Samantha, oh what a good few days Lincoln was. It seems every time I go to Lincoln I have an amazing time, I clearly went to the wrong University!
August, Oh August you were a spontaneous month! You came and went so quickly, in a blink. I ended up getting my first ever job! Not the best job but still a decent paying job where I don't have to do much! August you also saw me spend quite a bit of time with Sam, oh how I'd missed her! We had trips to Scarborough and Metal Night, we also attended Leeds Festival for the first time. Leeds was so different from Download, as good as it was I doubt I'll spend an entire weekend there again! Although I did get to see some amazing bands. August you came and went in a blink of an eye and were fairly quiet. So the summer was quite an adventure what did Autumn and Winter bring? 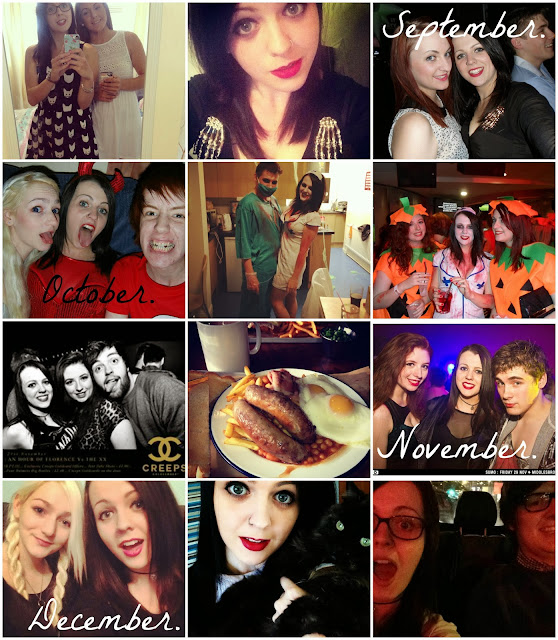 September, Oh September, you saw me leave home for the first time. I love it and hate it, I miss my grandparents and my cat terribly yet I can go out every other night and no one minds. September you brought Freshers with you, freshers which was quite an interesting experience. You brought Jonathan with you too, quickly he became a part of our group and now I couldn't imagine life without him! You also brought another trip to Lincoln with you for Sam's 20th, I do love a good trip to Lincoln!
October, Oh October, You made me so thankful for having the bestest friends in the world, oh I love my goths. I don't know how I'd have got through October with out Becca and Jonathan and Abbey either, these guys are just the cutest when you're upset. October also saw me actually join the gym and enjoy it! Yes enjoy it! I couldn't believe it. October of course had Halloween, I love Halloween it's my favourite holiday, I ended up having a night out with Jonathan dressed as Doctor and Nurse followed by a party in Lincoln with Sam, Brandon and co.
November, Oh November, you were filled with deadlines and stress! Along with unreal unpredictable nights out, Sumo quickly become our favourite place Slipknot playing? Hell yeah! November became the month of hangover meals in our new favourite place the Southfield, seriously if you're in middlesbrough take a visit the food is unreal! Me and Becca also attended Durham Lumiere in November, but I might as well admit that November was filled with nights out and not much else.
December, Oh December, you reunited me with my best friends, my favourite goths. I went to see the Hobbit with Lewis and had nights out with Sam and Brandon too. I had catch ups with old old friends and ate far too much food. December you also brought one of the strangest nights out with some important people and brought a Forensic Science Conference too! You brought Christmas as always, which was super lovely and relaxed this year. So that is it, that is 12 months rounded up in short paragraphs it's mental so much yet so little has happened.

Favourites of the year?
Purchase Definitely my Jeffrey Campbell Litas <3 also my Rib Tattoo and Nose ring cause they count right?
Books Chuck Palahniuk - Lullaby & The Mortal Instruments Series - Cassandra Clarke
Film The Worlds End & The Hobbit The Desolation Of Smaug
Album(s) Sempiternal - Bring Me The Horizon, Hail To The King - Avenged Sevenfold, Common Courtesy - A Day To Remember.


Well 2013 you were definitely a whirlwind of a year, filled with metal and good friends. I think the photo below really sums up 2014. I'm sad but happy to see you go, 2014 is going to be a good year, I'm determined to make it unreal. 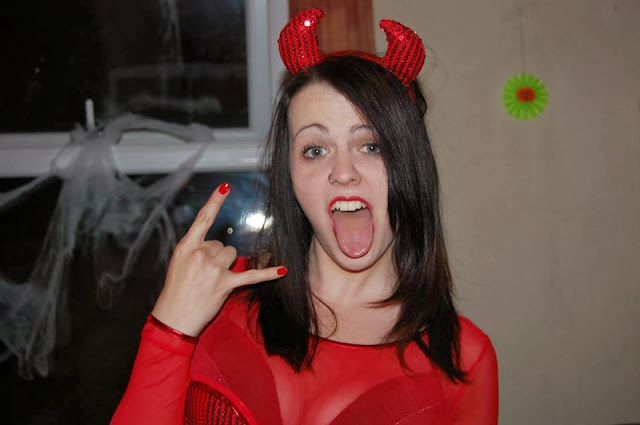 I have another possible posts left to recap my 2013, but I'm undecided on posting it right now but who knows? I've got one to come on 2014 and what it means for me and the blog! Exciting times. I hope you all had a fantastic new year and I can't wait to see what 2014 brings you all! If you've done a roundup/recap please leave your links I'd love to check them out!
K. x