In honour of the new Slipknot track Negative One which was released on their site on Friday and the video released today! I've decided that this weeks playlist will be solely made up of Slipknot tracks because you know they're amazing. I'm a bit of a Slipknot fan girl I won't lie, I met Corey Taylor back in 2010 and I still have the photo framed no shame. I remember the first time I heard slipknot, I remember I was in year 8 I was just starting to listen to heavier music up until this point I was strictly pop punk haha. One of my friends sat me down and played Vol 3. And I have never looked back. I remember googling them after that and finding them as a bad fascinating they wore masks, were weird and played angry music I was so in. 8 years on and I'm still pretty much amazed by them and a little in love with Corey Taylor haha.
So what's on my Slipknot playlist? Even if you're not a massive fan of the 'knot you'll have heard most of these! Also I'm not going to tell you in a load of detail why I love each song because I just do ok? Haha. 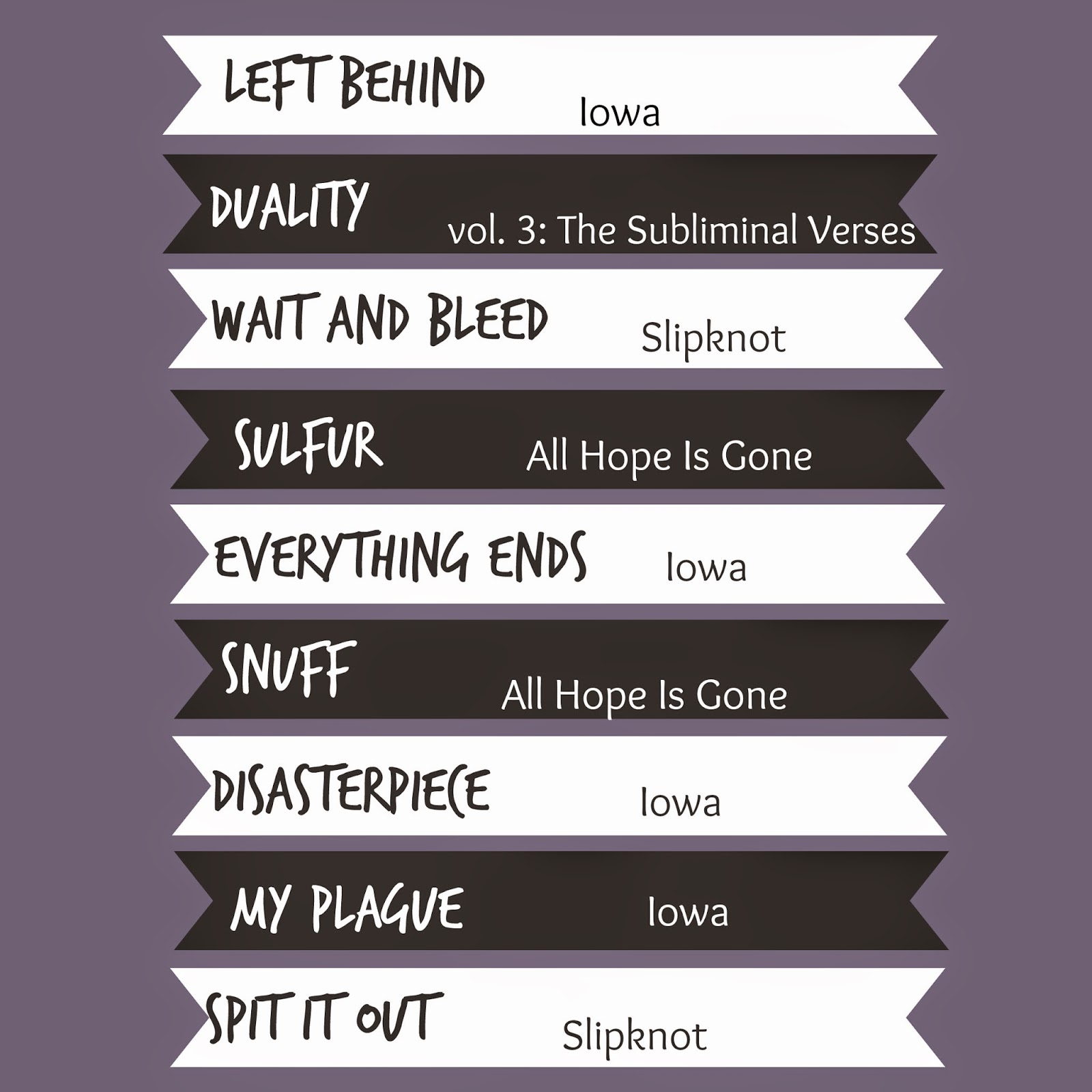 Left Behind, Iowa (2001) - Ooooh man this track is definitely my favourite if I could pick one haha, I just love the chorus, plus it's brilliant to shout along to when you're pissed off which is always a major bonus of a track if you ask me.
Duality, Vol. 3 The Subliminal Versus (2004) - This is my favourite song at Sumo Middlesbrough, it gets everyone jumping about the chorus though, oh man I love the way 'I push my fingers into my eeeeeyeeeees' is sang, like I don't know it just it's sooooooo good. Like the way Corey sings the I push bit so softly before shouting eeeeeeeeyeeeees. I love to sing it real dramatically.
Wait And Bleed, Slipknot (1999) - I love how Raw? Is raw the right word? This track sounds, I love how the beat is more jumpy you can do a kinda jumpy dance to this song haha.
Sulfur, All Hope Is Gone (2009) -  I love the chorus to this song, it just I don't know the first time I heard it I fell in love with it. The lyrics 'you don't always know where you stand, 'til you know that you won't run away' just really speak to me if you get what I mean. Like  that's all I can really say about this song haha.
Everything Ends, Iowa (2001) - If you want an angry song this is definitely it. This makes me feel so much better when I'm proper pissed off. Oh man it's sooo good to put on full blast and just shout your heart out to. Just whack it on when you're pure angry and you'll feel so much better.
Snuff, All Hope Is Gone (2009) This is one of my favourite videos, we get to see how beautiful Corey Taylor is without his mask haha. The song itself is so beautiful too, the lyrics are just perfect. It's so different to most slipknot songs because it's much slower and it's just so beautiful. I've heard Corey play this acoustic live dedicated to Paul Gray (number #2/bass player of Slipknot) after he died and it's just so hauntingly beautiful acoustic.
Disasterpiece, Iowa (2001) - Just once again a song that is perfect for when you're super pissed off.
My Plague, Iowa (2001) - Technically this was the first Slipknot song I ever heard but I didn't even know who it was I just knew it was a catchy as fuck tune that was on the credits of Resident Evil. I love how angry the lyrics are but Corey doesn't sound too angry at the same time.
Spit It Out, Slipknot (1999) - First off this is a great video, secondly it's a great song I don't have to say much else.

As you can tell I love Slipknot and I can't really explain why! All I know is that Slipknot are amazing, and you would be crazy not to listen to at least one of the tracks on my list!