So it's Tuesday again so here I am to share even more music with you all! I'm worried I'll run out of tracks but I'm always going through phases of which band I love and which I hate haha. This weeks playlist is a bit of a mix we have metal, pop punk and some hip-hop haha. I think hip-hop is the genre please correct me if not. There's a few guilty pleasures in here and some new tracks. 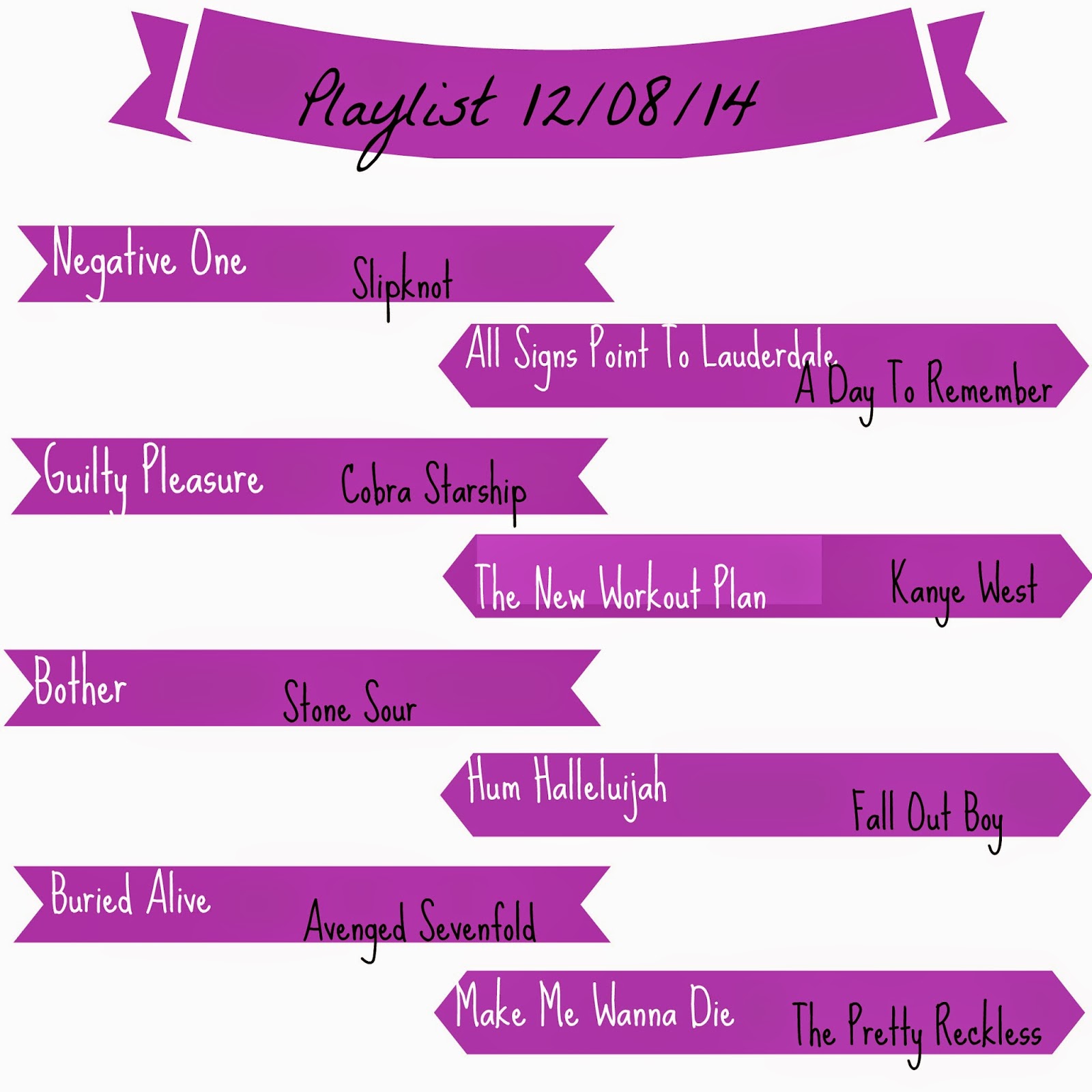 The Negative One, Slipknot -  I'm still very much loving the new slipknot track, I'm still sure that the video is weird as fuck and could do with some Corey but you know. I don't really know what I like about the track aside from the fact it sounds like the older 'knot stuff and that chorus is kinda catchy too. Plus it's the first track that's been released since 2009 (Snuff single/video) so it's pretty damn exciting.
All Signs Point To Lauderdale, A Day To Remember - Ah man, I love ADTR they always cheer me up and remind me of my days at college. The first guy I properly made friends with at College was this guy called Jamie and he had all this long emo hair and I only spoke to him because he had an ADTR top on and we pretty much listened to a song by them every day haha. I also saw them for the first time when I was at college so you know. This song though really makes me think about  my home town though, I hate it I can't wait to leave I hate 90% of the people here and the lyrics really sum up a lot of things about my life.
Guilty Pleasure, Cobra Starship - Oh man if you didn't listen to Cobra Starship back in like 2007/08 what were you doing with your life? Did you just completely miss out the emo/pop punk/scene phase?! I had completely forgot about Cobra then I stumbled upon them on an old iPod and oh man they still make me want to dance like man. The video to this song is just brilliant man. (how many times do I want to say man? So freakin' northern!) You've gotten to listen to these guys if you're feelin' down 'cause they make you want to dance about like an idiot.
The New Workout Plan, Kanye West  - If this song isn't on your workout playlist what is wrong with you? I remember the first time I heard this song I thought the lyrics were pretty funny and to this day I still do. My favourite ones are Eat your salad, no dessert, get that man you deserve. Like seriously those lyrics are brilliant, the song actually gets me so excited for the gym, if you're lacking motivation whack it on!
Bother, Stone Sour - Oops we have more Corey Taylor, I love this song it's on the Spider-Man sound track too so you know it's a good one. It's from Stone Sours first album too, I love that it's a slow song I don't really listen to quieter slower songs normally but Corey's voice is beautiful. The lyrics are sooo nice and well I just like Corey's voice so.
Hum Hallelujah, Fall Out Boy  - Once again Fall Out Boy feature on my playlist, the first time I played Infinity On High this was the one song bar the ones that were singles that jumped out at me. I love the lyrics I thought I loved you but it was just how you looked in the light like that is such a good insult for someone! Haha, the song lyrics are just great as is Patricks voice.
Buried Alive, Avenged Sevenfold - First off I love the intro to this song, it's one of my favourite ever intros actually I just really like the guitar all the way through it. I think I really like it cause you have the softer singing then M Shadows does his tough man voice toward the end. I'm not really sure what it is about the song that I love but I just really like it and all week I've found myself singing it in my head haha.
Make Me Wanna Die, The Pretty Reckless - I like pretty much everyone else first heard of The Pretty Reckless when they released this song and it was on The Kick Ass soundtrack. I instantly wanted to be Taylor Momsen oh how I wanted long legs and to go back to wearing far too much eyeliner and I just wanted to live in skimpy dresses and stockings. Haha. To be fair I still do and I still have a major girl crush on her! I hadn't heard this for ages then it came on the other day and I remembered why I started listening to TPR. You've got to listen even if it's just to check Taylor Momsen out haha.

So that's this weeks playlist, I'm trying to think of which band or genre I can pick for next weeks playlist haha, if you have any suggestions of what you'd like to see please let me know! The same goes for if you've got any bands you think I should listen to!


Are you a fan of any of the tracks on this weeks playlist?

Find out what other tracks I've been loving here!