So I started 2014 pissed off and in a mood and no doubt it will end that way since I'm working haha. So 2014 was has been a bit of a shit year to put it bluntly but to be fair after the epic year that was 2013 I didn't really expect as much from 2014. Although saying that it has been a pretty amazing year in some parts. This year has however taught me a lot of things, that I don't need the people I thought I did in my life which is quite funny because I never thought it would come to that, I've also learnt that I have people I can depend on no matter what and they're the greatest friends and family members I could have. But anyway before I get all deep or some shit lets see what actually happened during 2014! 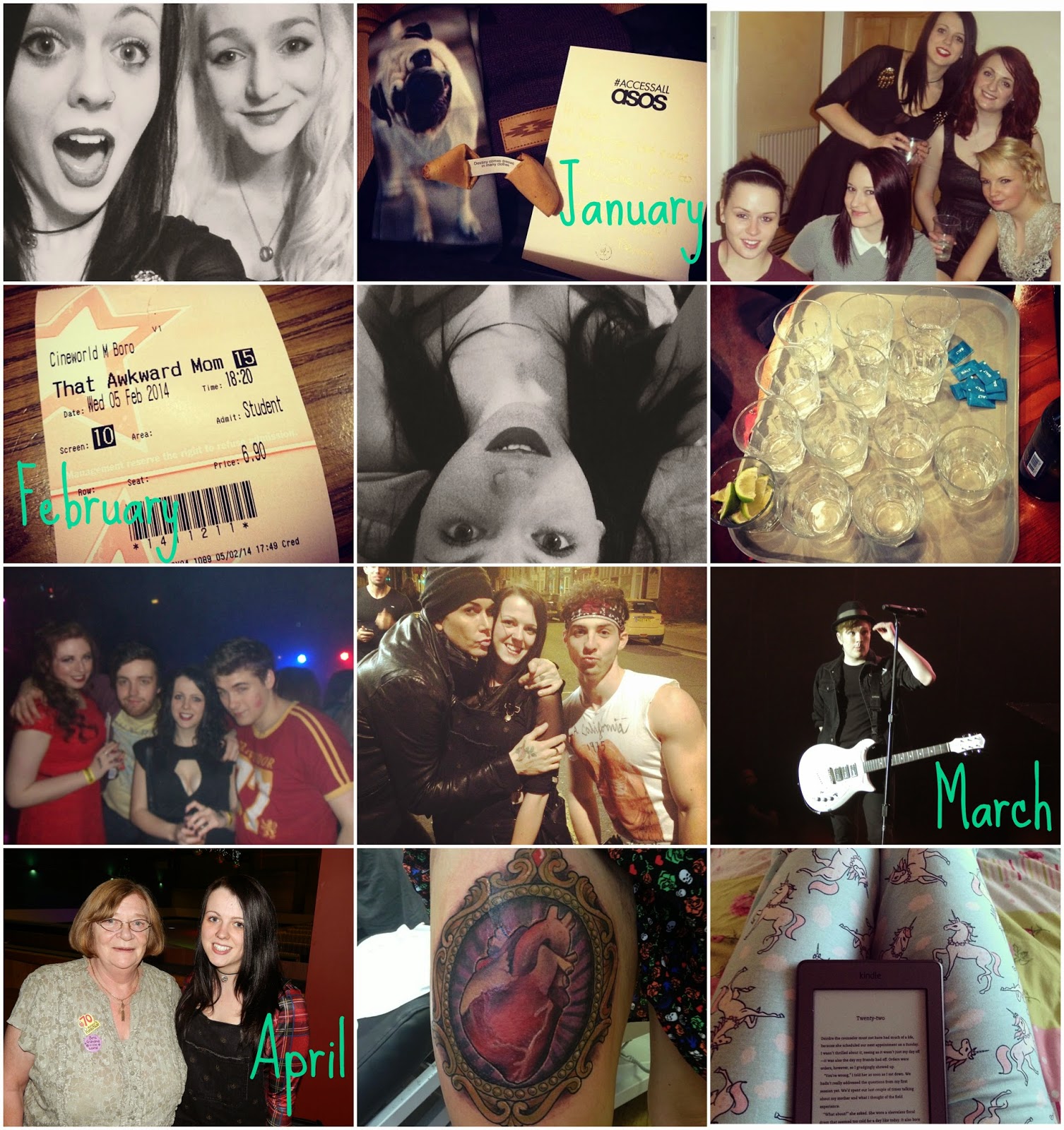 January, much of January was spent hungover going to Creeps and Sumo was pretty much all I did, although as you can see Sam came up for a night out so it was definitely a good month. For all of you who haven't been reading my blog for that long Sam's my best friend and has been for about 9 years now but she lives in Lincoln for uni so any time she's home is a good reason to go listen to metal and get mortal.
February, Aah the month of Tequila shots! February was full of stress and with stress comes nights out to relax you, shots of tequila became a mandatory thing for nights out, these never ended well I pretty much threw up every time I did it keepin' it classy and all that. February was full of girly times too, I had many a nights in with a take away with the girls or a film night, me and Abbey went to see That Awkward Moment too just because well naked Zac Efron what more do you?! Haha.
March, March is a good month every year because it's my birthday! This year saw me turn the grand old age of 20, my god am I getting old haha. To go with it I had afternoon tea with my friends, a Harry Potter themed party and a 2 nights out. It wasn't bad. I also got a Triwizard cup so my life was pretty much complete! I also got to go down to Lincoln to see Sam with Brandon, we also got to see Steel Panther who were amazing such a good show, we then headed to the legendary Sugar Cubes where I got to meet Lexxi from the band! But the highlight of March most definitely was seeing Fall Out Boy they were just so unreal, words can't even describe the emotions I felt seeing them haha, I know I saw them last year but seeing them play really old stuff like Chicago just ugh was so perfect.
April, Gran Dot turned 70 in April and it was such a highlight of the month, she got drunk and it was hilarious. I got my thigh tattoo at last! I'm so in love with it still! April wasn't overly exciting it was mainly spent catching up on course work, reading books and seeing my family. Although I had a few nights out and a lovely trip to the beach with my favourite guys Shaun and Michael. 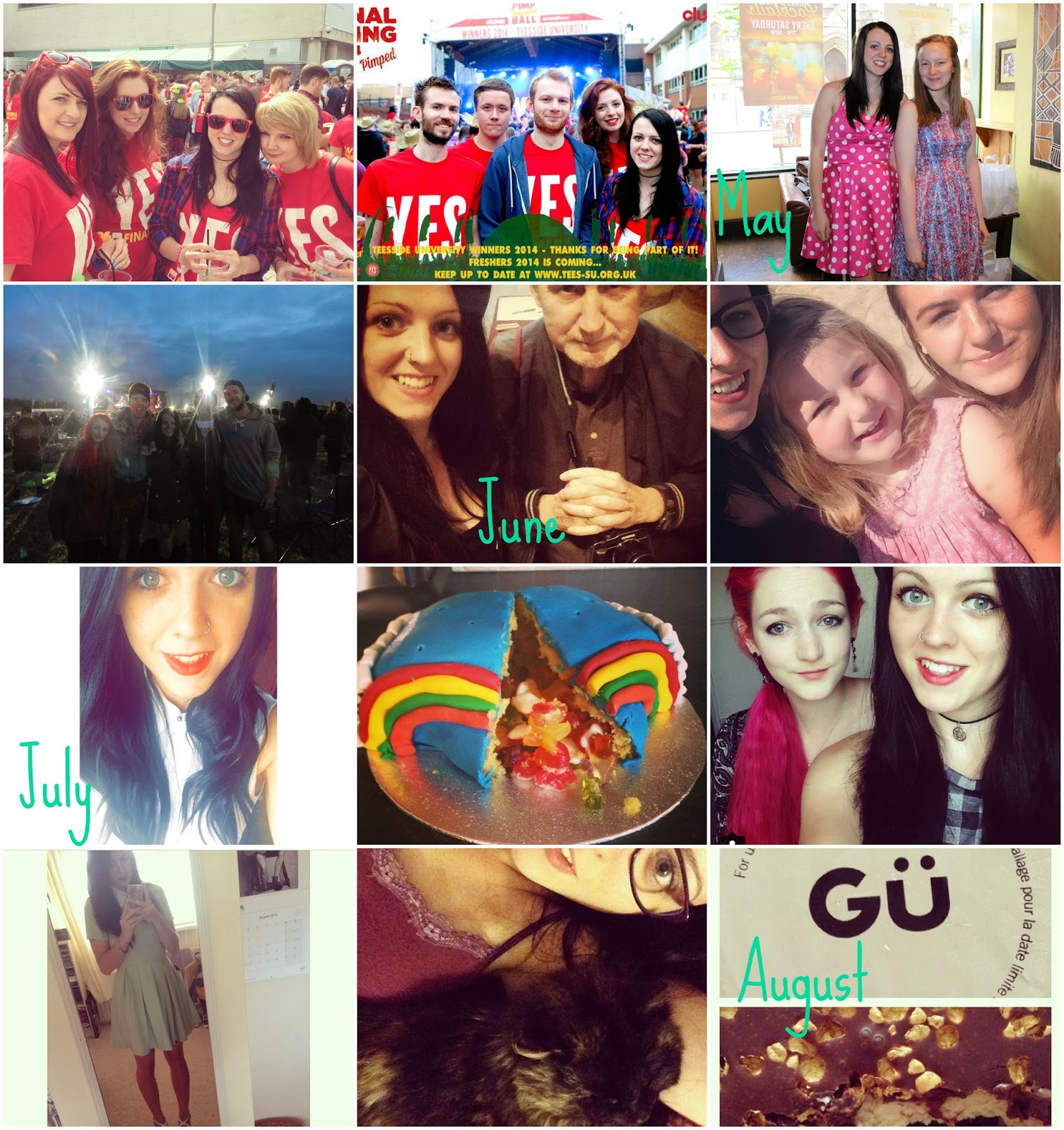 May, what a busy month may was, I finished my second year of university meaning I had several weeks of revision and a couple of exams but it was still a good month, I got to go to a Star Wars themed night out for May 4th which was pretty cool. The main highlight of May was Final Fling the end of term party at uni, this year I had Jager and pancakes for breakfast yet still made it to 3am and I'm fairly sure I didn't throw up although I do remember getting extremely soppy and telling people how much I loved them how good 2nd year was haha. Finally May ended with me helping host a blog event with Danni! It went well and I was pretty proud of us for pulling it off since there were quite a few problems with venues and such.
June, DOWNLOAD FESTIVAL, that is all you need to know about June, I absolutely loved Download this year, it was so relaxed in comparison to last year and it was so nice to spend 5 days with some of my favourite people ever. I saw some amazing bands too so it definitely the best thing that happened this year. I also attended a Photography evening at Durham Cathedral with my Granda which was fun as he'd been ill for a while and this was a huge thing that he left the house for a while since he'd become a hermit and couldn't do much. I spent a lot of June with my grandparents and my little sisters it was nice.
July, Hello a proper job! I got an actual job that wasn't dressing silly or holding a sign I got a job at Empire in town and I love it. July was a pretty dull month not too much happened, I did have a little trip to Lincoln to see Sam though which was lovely as we had cocktails and a night out and I just really love Lincoln.
August, I was settling into the Empire family at this point, I went on my first staff night out also which was super fun even though I left early. I spent a lot of time with Oli Cat as I was going back to Uni in September and knew I'd miss her. I ate soooo much cheesecake in August I'm not entirely sure how I didn't end up 20 stone! I pretty much lived off it, especially the GU ones. August also saw me have a massive fall out with my mam, if you've read my blog for a few months or know me you'll know why it wasn't really the best month but I'm most likely a stronger person for it now. 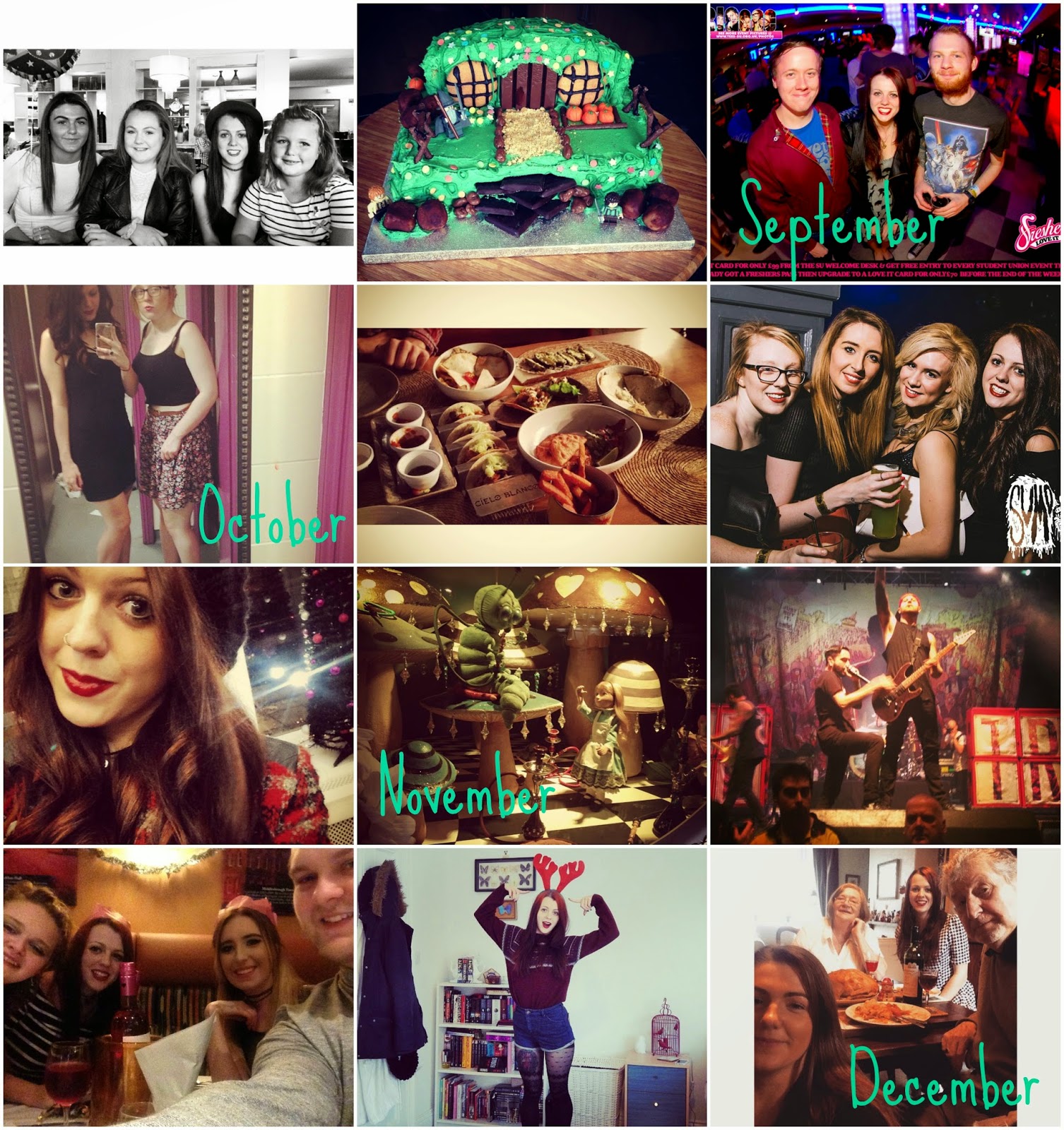 September, Oh man September saw me move back to Middlesbrough, I love the new house and the girls are great (Abbey, Becca and Rosie). My baby sister turned 18 and I truly feel old! I swear she just turned 16 haha. My bestest friend Sam also turned 21! So I helped her sister decorated the best cake I've ever seen if I do say so myself, if you don't know what it is it's Bilbo Baggins' house! (LoTR/ The Hobbit). September also brought freshers with it and I got to spend freshers with my favourites Chris, Nick and Michael meaning it was absolutely hilarious and I was encouraged to drink far too many shots!
October, I had a quite relaxed October, I had a couple of nights out with Amy from work and our friends Amelia and Sophie all of which included drinking too many shots and most likely ridiculous dancing on my part. I also took a trip to Leeds to visit Jamie and see Bury Tomorrow who were amazing. I also got treat to that amazing looking Mexican you can see since Jamie's an utter babe and can't see me starve haha. The food tho definitely the best thing I'd eaten all of October haha.
November, I attended the Paul Mitchelle event in Newcastle which meant I got my hair done all pretty and got to spend a day with my favourite blogger Beca. I didn't really do too much in November it was filled with lab work and university deadlines. I did have a nice trip to Whitby though which was super lovely and I did get to see A Day To Remember who were absolutely unreal and oh my god it was sooo good!
December, this month has been filled with alcohol and food that is the only way I can describe it but then again what else is December for? I had my first ever staff Christmas Party with the Empire lot and I loved every second of it, I definitely drank too much wine though! I got into the festive spirit super early this year also, which makes a change as I don't often feel festive until Christmas Eve. Finally I spent my first Christmas without my mother around with just my sister and my Grandparents and I wouldn't have changed it for the world, trying to figure out how to use a selfie stick and just spending time with my grandparents was really the best.

Looking at my post from 2013 and my aims for 2014 I feel like I've accomplished quite a few of them, I changed my blog and gave it a new name and I'm so much happier with it, I didn't reach the 250 bloglovin' followers like I had hoped but you know that's not why I write. I read a book every month, and spent more time with my best friends became slightly spontaneous and had a lot of fun. I did fail to spend less money on nights out, but hey I had fun so what's the problem? Haha. Personal goal wise, even though I'm still not happy with my body I'm at the size I wanted to be I just need to tone up, I've definitely made more effort when I get dressed on a morning unless I'm hanging of course, and I got a proper job at Empire! Haha. Well a job that doesn't require me to do something silly. I did however fail to eat healthy and be a more positive person. I haven't really got any goals for next year but I definitely want to blog more and be much more positive but hey ho we'll have to wait and see won't we?


2014 has been a hard year but it's also had some good points, I've learnt who I can trust and who to leave behind in 2014, I'm hoping 2015 is filled with many trips and lots of fun, I'm also hoping it see's me become a more positive person and get where I want to be career/university wise.
K. x
follow me on Bloglovin', Instagram, Twitter &Lookbook