This time last week I was waking up with that post gig buzz you get where you're still all excitable because it was so fucking amazing you can't help but get excited remembering how good they were making you want to talk about it constantly although you have an extremely sore throat from screaming too loudly. I was going to write this post last weekend but it would have literally have just a babble of words about how much I love Slipknot haha, which this post will partially be buuut not as much. We may have had seating tickets but we had an amazing view, didn't get injured and it didn't ruin the show for us at all. It is fairly photo heavy but I couldn't narrow the photos down! 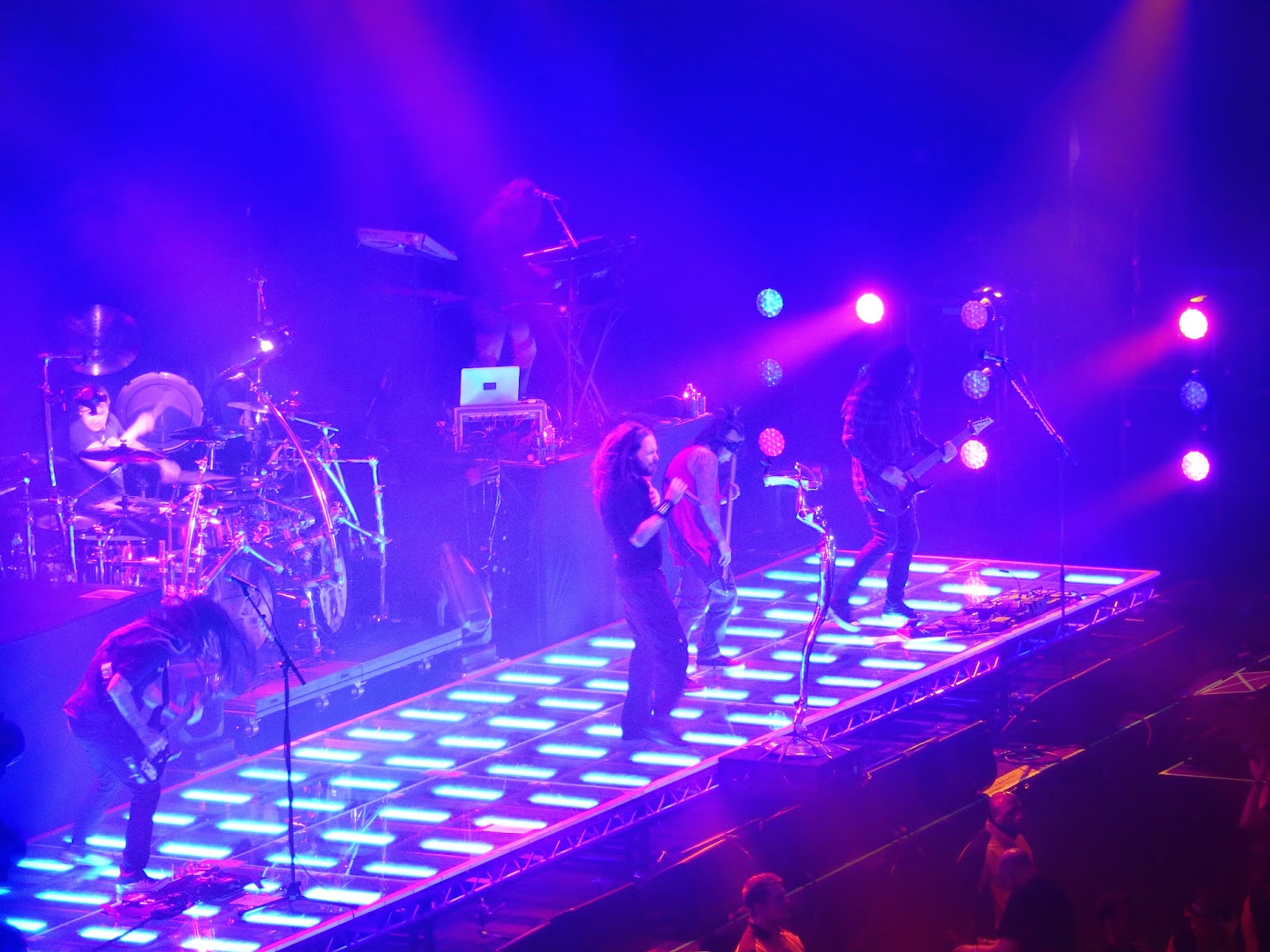 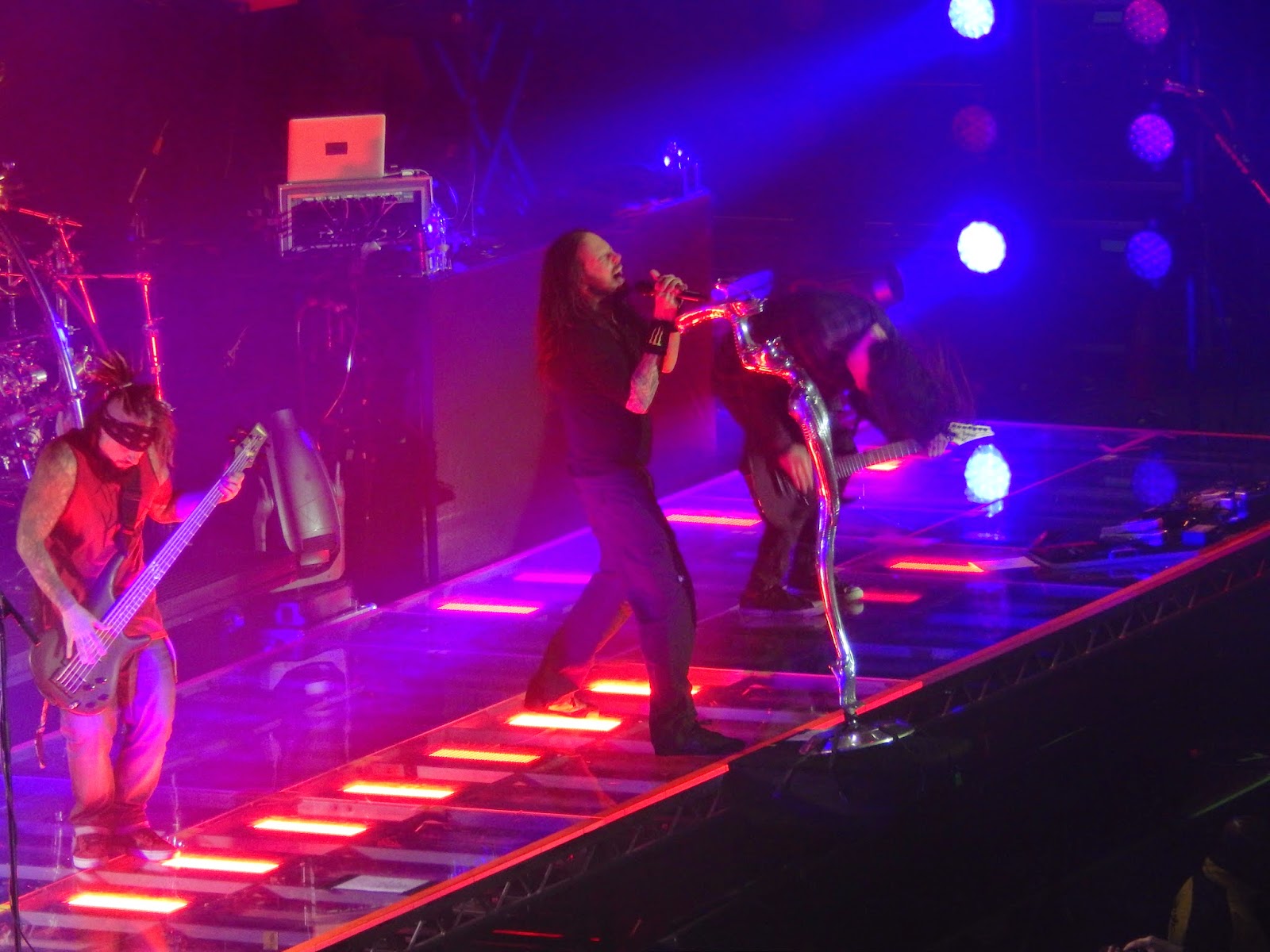 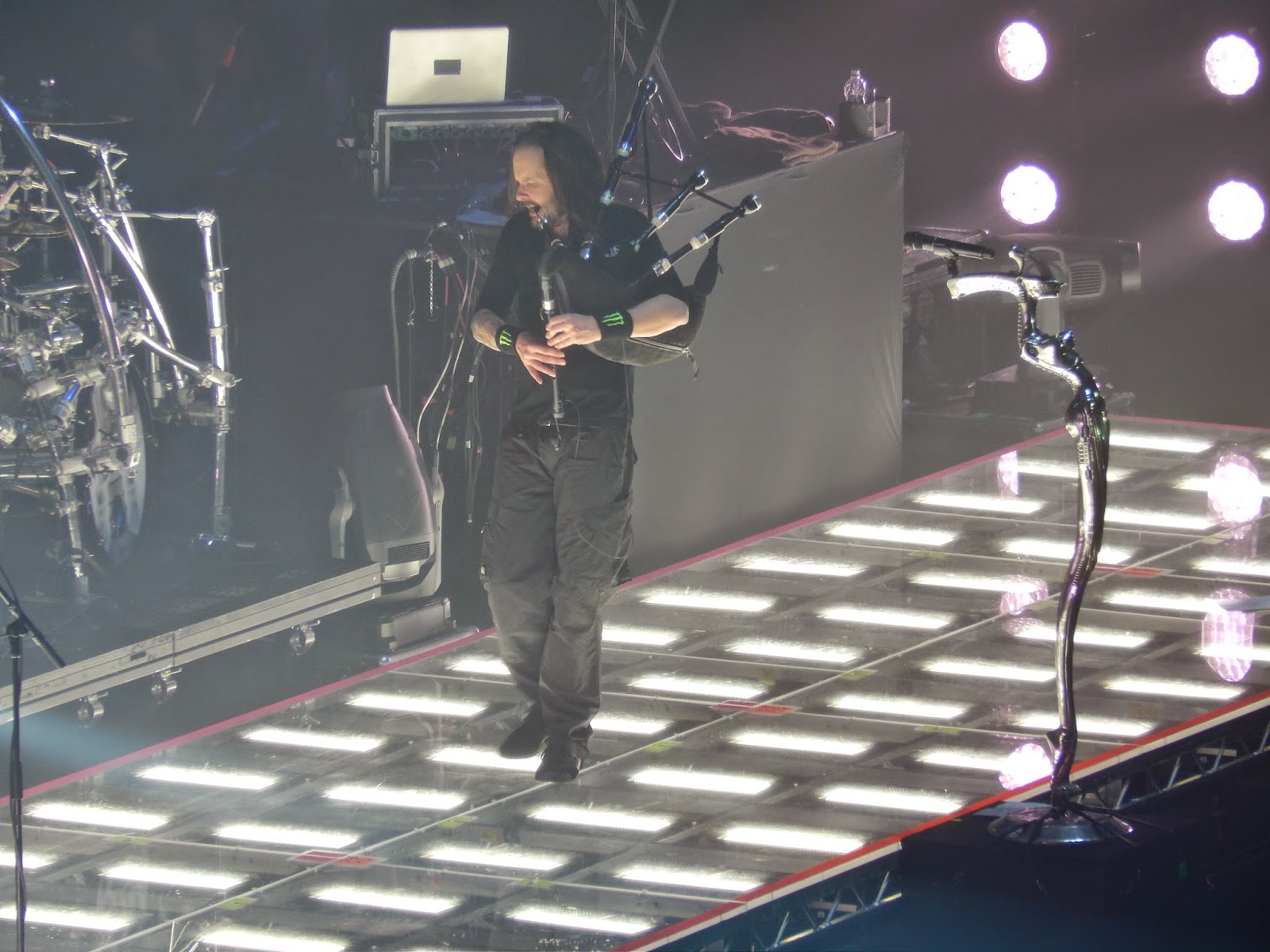 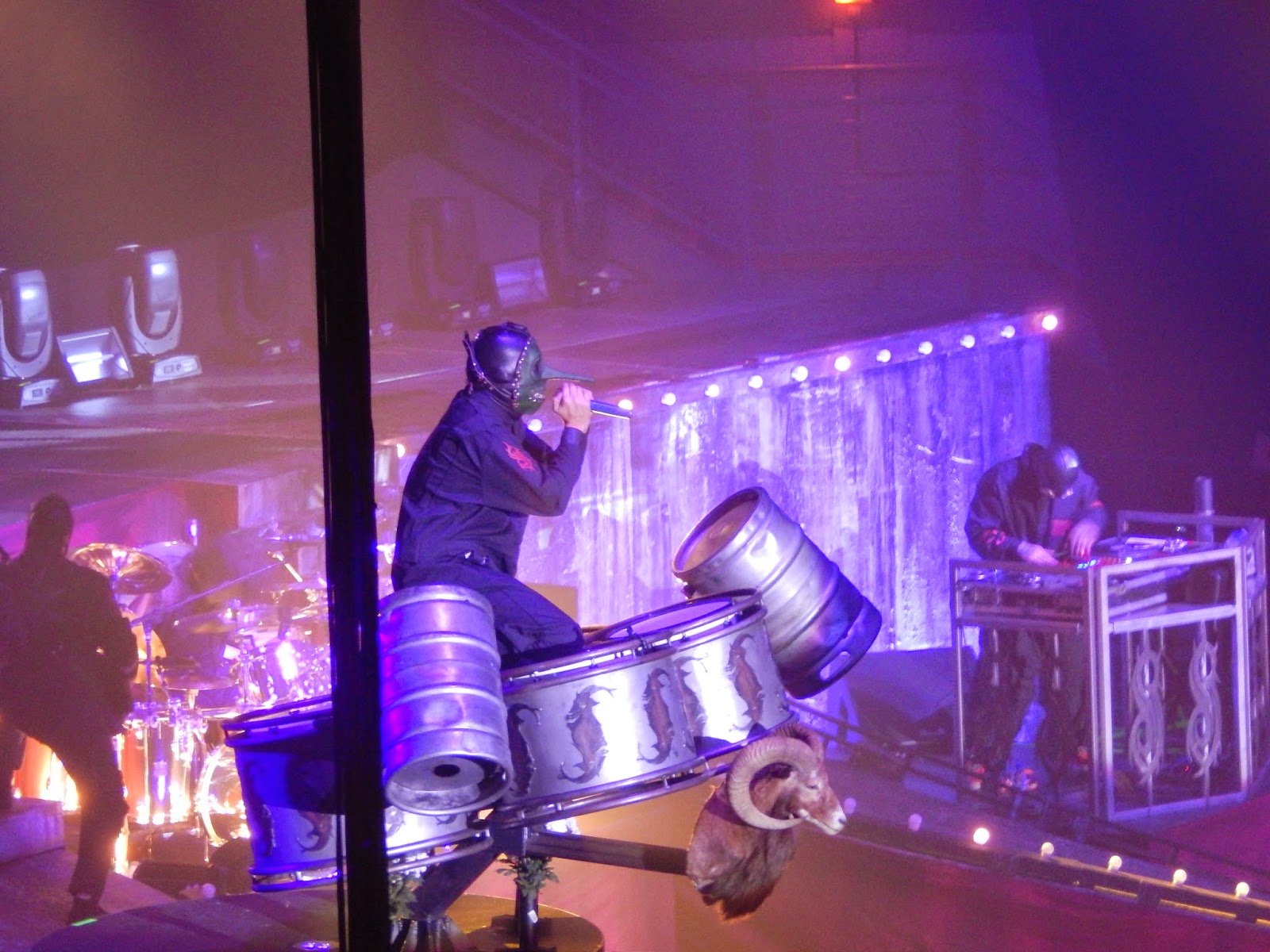 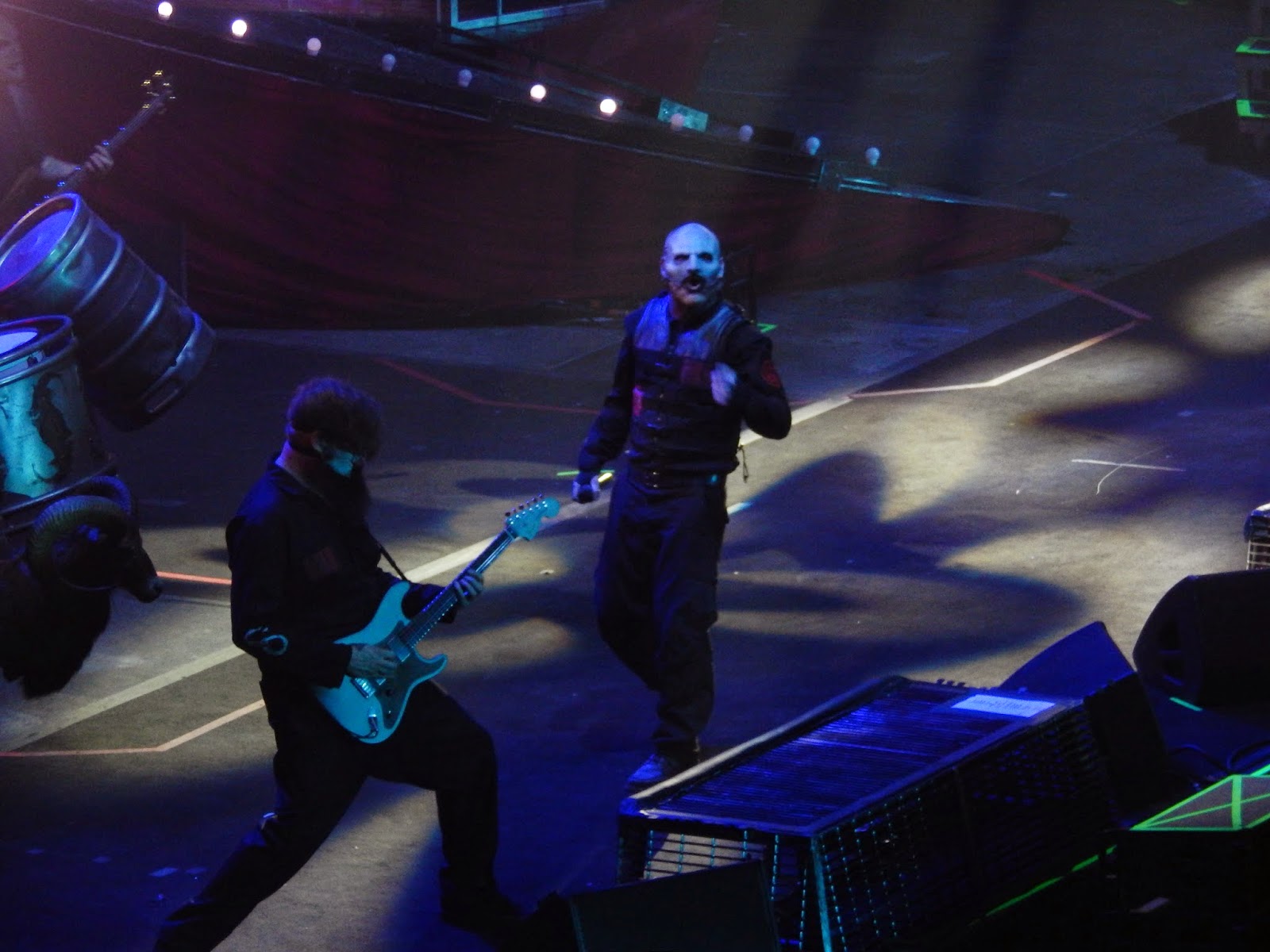 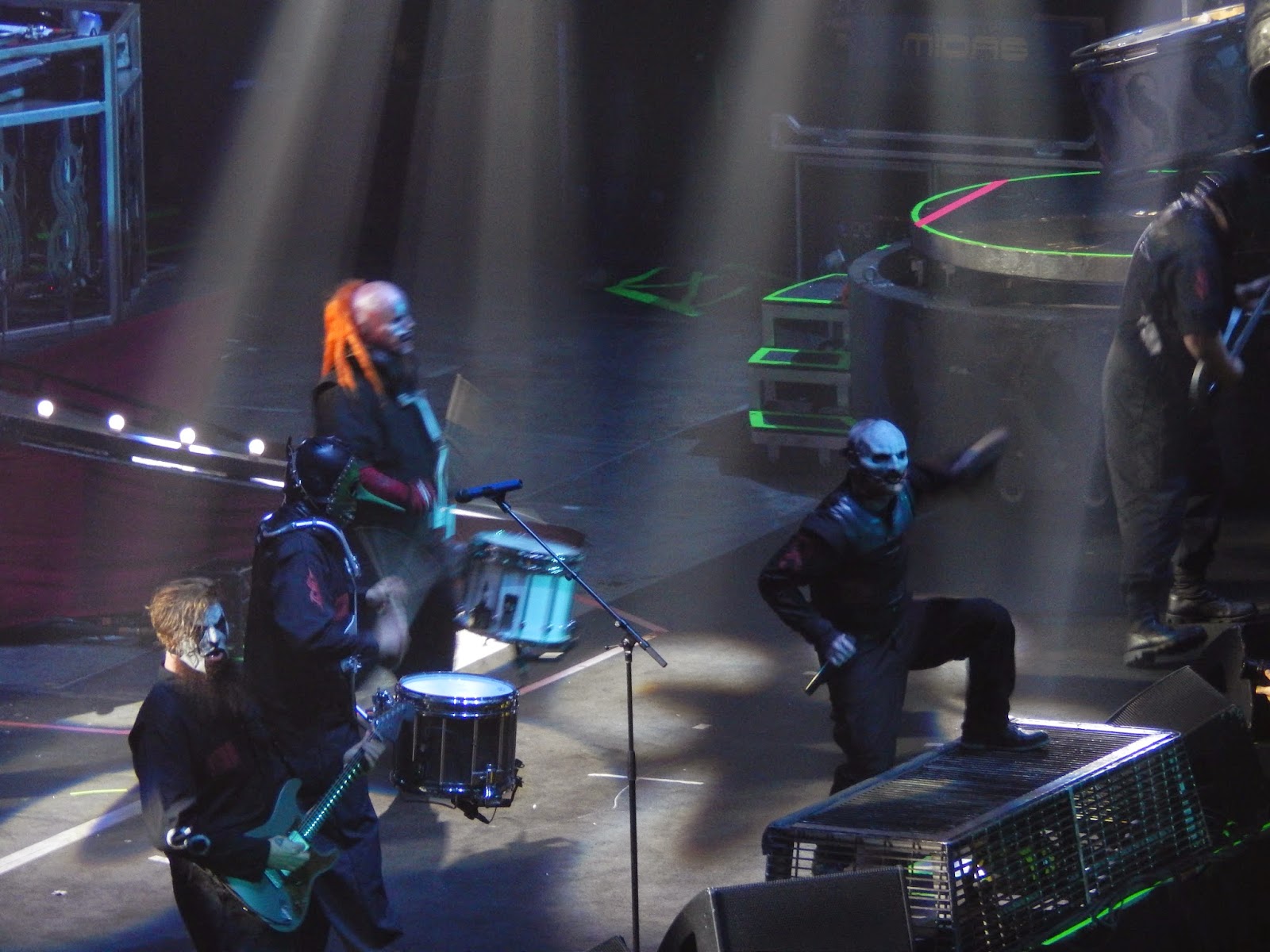 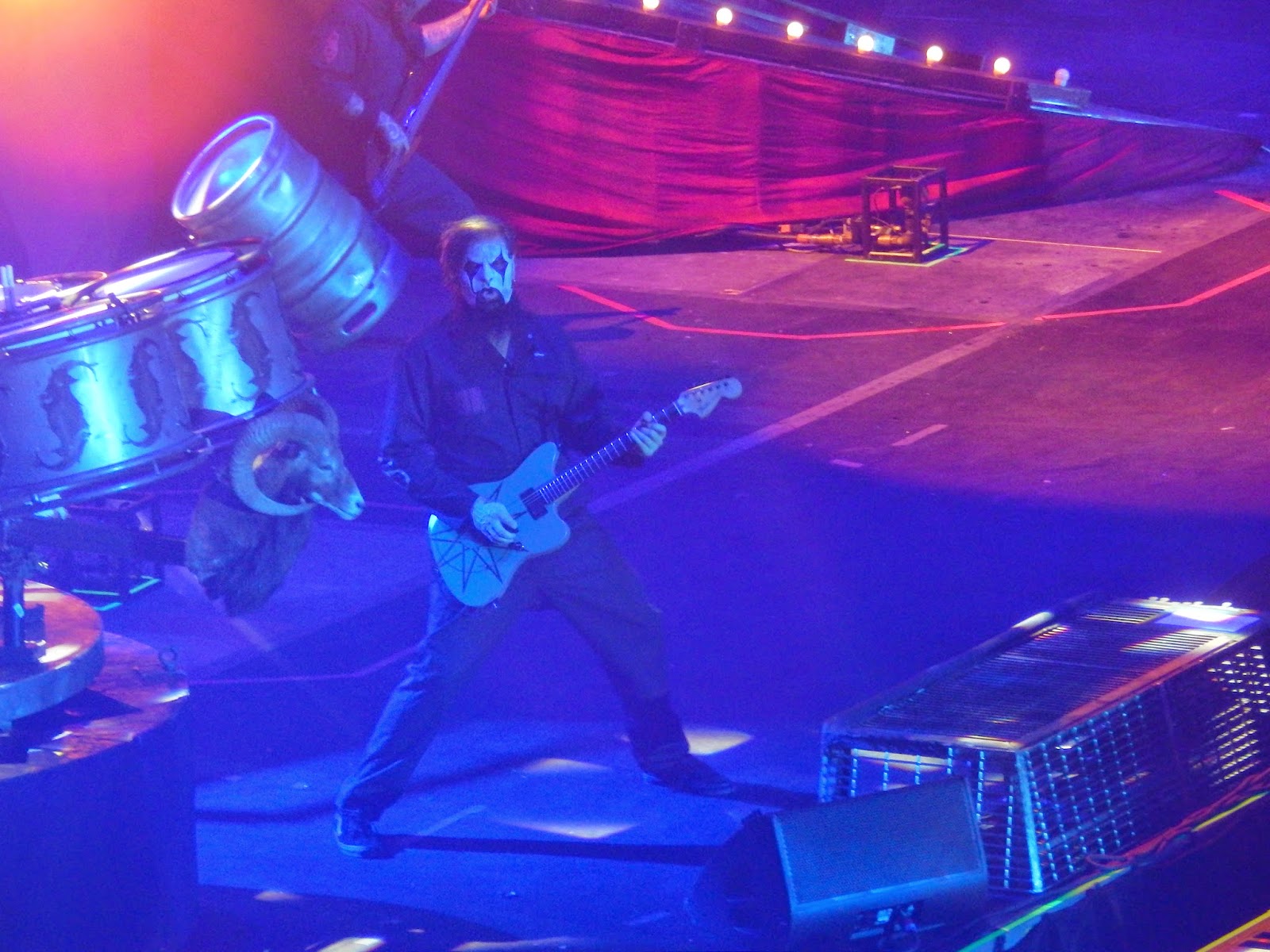 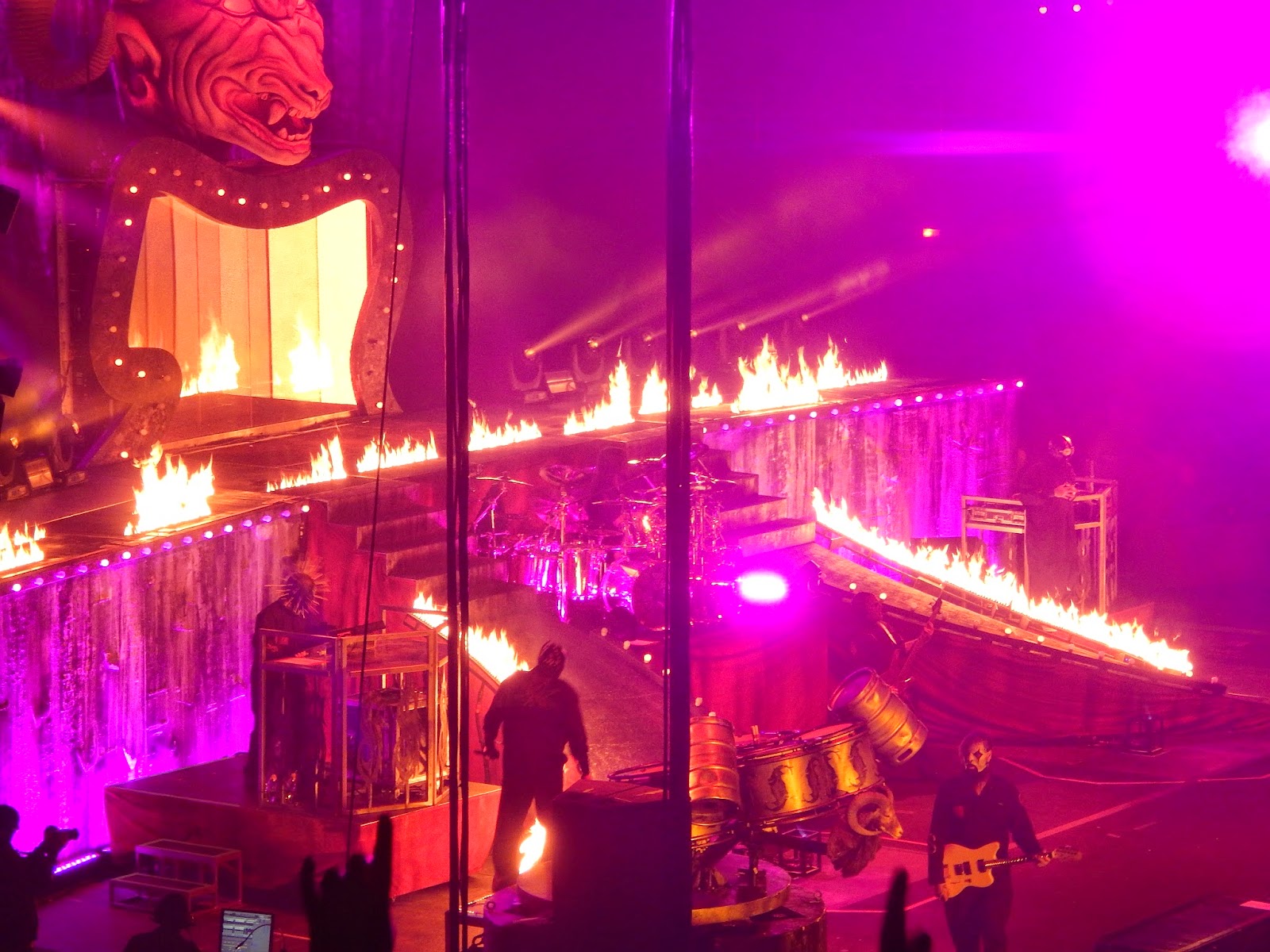 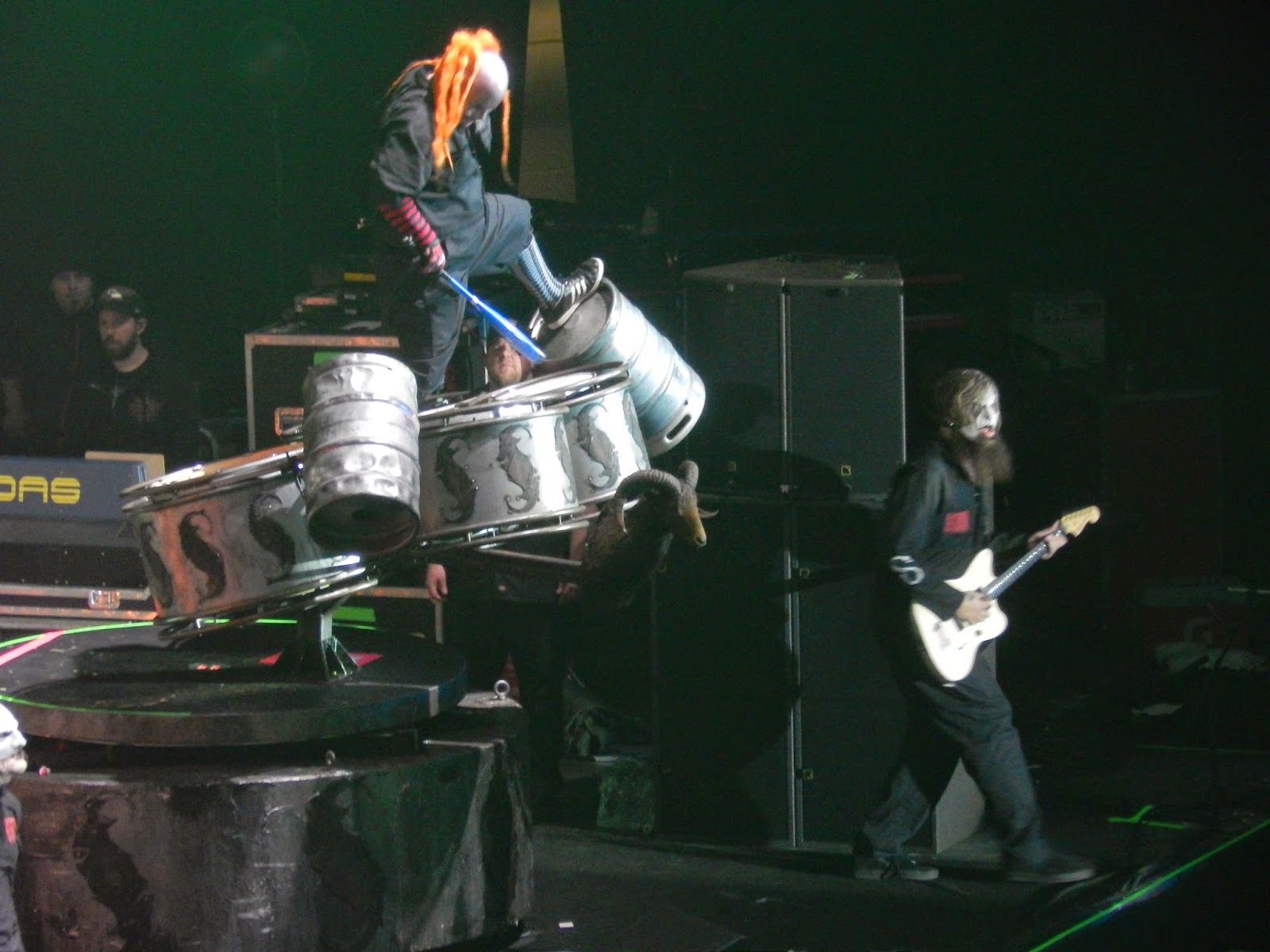 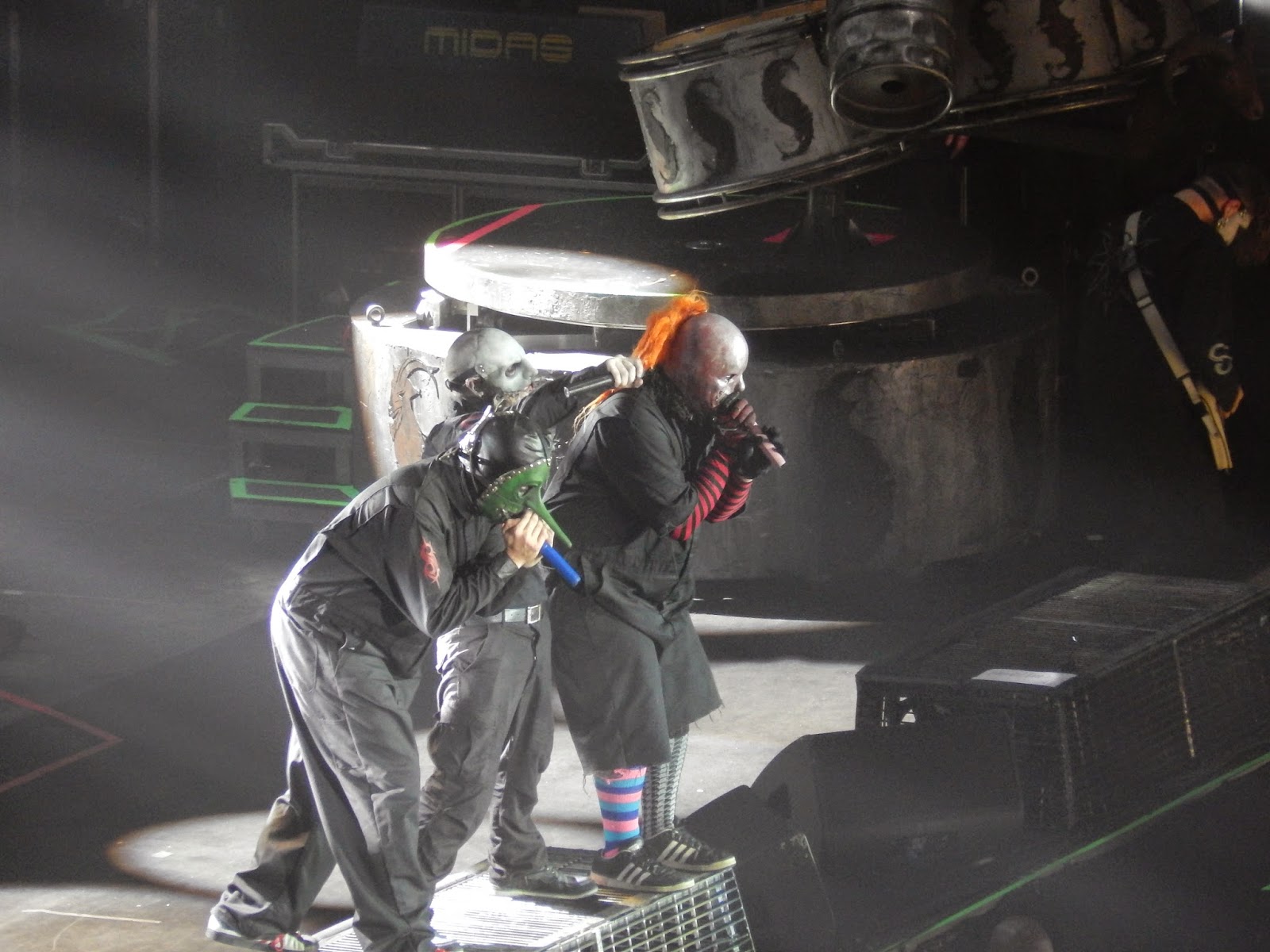 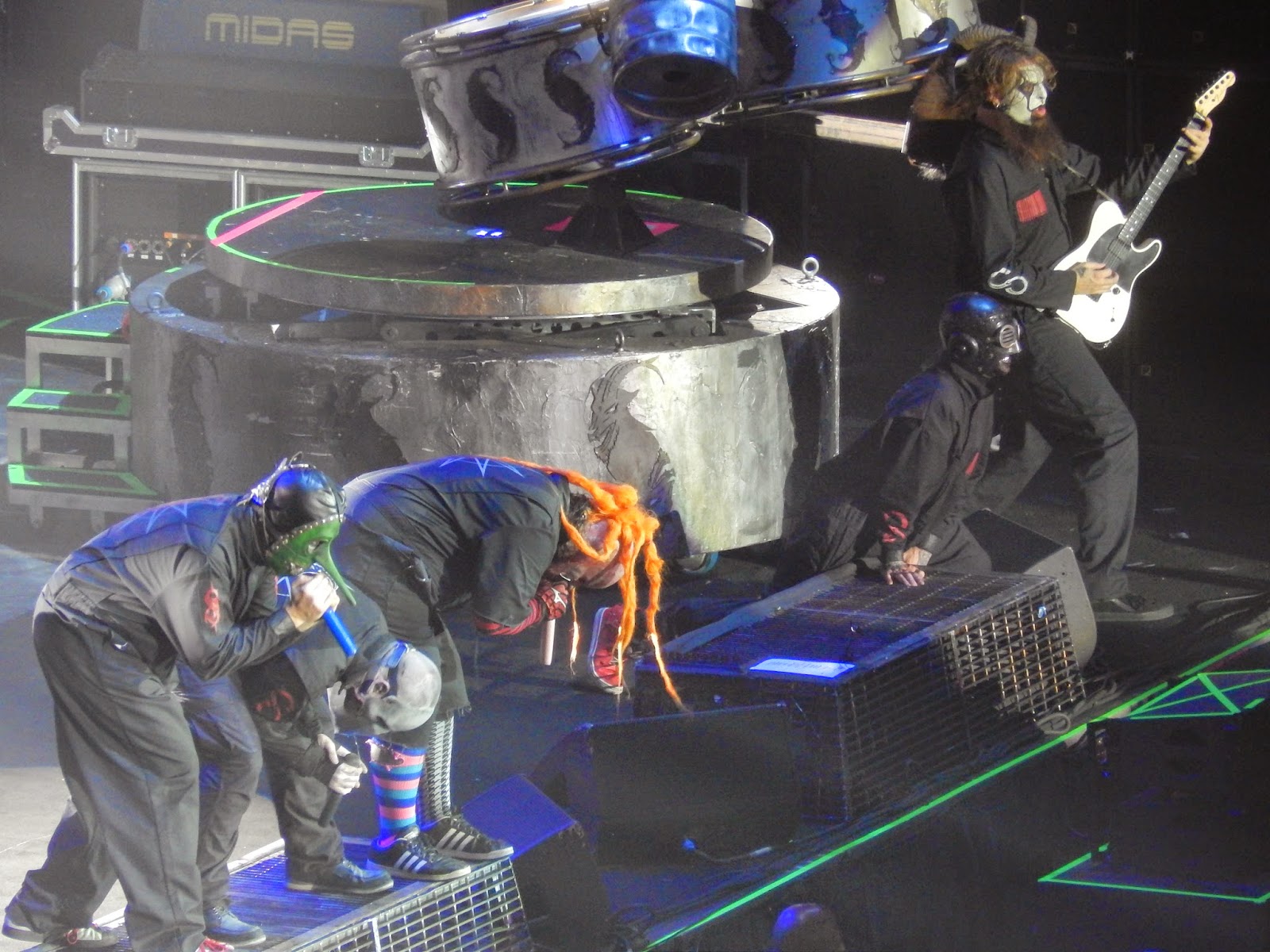 Aw how cute is that family photo to end the post ey? Absolutely love me dad he's the best for getting us tickets and Eleanors probably the coolest of my 3 sisters since she likes good music. Anyway back to the gig itself. King 810 were fairly interesting, I'm not sure I enjoyed them, they played one song, I think it was this one which was good but the rest I just couldn't deal with the guys voice. Of course those guys were just getting us warmed up for the main support act Korn. If you haven't heard Korn go do it right now they have such an amazing sound, Jonathan Davis' voice is one of my favourites. I enjoyed them a lot more this time than when I saw them at DL a few years ago most likely because I knew more songs but oh man were they good. The played a pretty good setlist too which songs including; Got The Life, Shoots & Ladders and of course Freak On A Leash.
Once Korn had finished it was time my for my favourites Slipknot of course, oh man words can't describe the excitement I felt as I heard XIX begin, that music just gave me goosebumps and I just wanted it to hurry up and be finished so the curtain would move and they'd start the show properly. It's definitely the best Slipknot show I've seen and this was my third, they just absolutely smashed it and the new guys? Well they played really well, in my opinion you couldn't tell they'd got new guys it sounded just like Slipknot always has, but then again I'm not exactly amazing at pinpointing instruments but everyone was on point with their playing. Of course Slipknot played a selection of their best and their newest; Heretic Anthem which is always a good crowd interaction song, there's really nothing like chanting If you're 555 I'm 666. The same goes for People = Shit  which always a favourite to see the young uns in the crowd chant along to, although with the new addition of Custer and it's Cut Cut Cut Me Up and Fuck Fuck Fuck Me Up I'm not sure what I enjoyed chanting along to / watching my 12 year old sister chant along to more! I honestly couldn't wait to hear Custer live once I'd heard it on the new album because I knew it was going to be amazing and it just was. My favourite point in the show was when Corey said 'Who wants to go back to Iowa' and I was just like omg I'm going to lose my shit Iowa is my favourite album and then they started playing Left Behind and I literally just jumped up and down almost crying in full on fan girl mode shouting at my dad like OMG THIS IS MY FAVOURITE EVER SONG IM SO HAPPY. Haha They also played My Plague which made me happy as it was one of the first Slipknot songs I ever heard since it was on the credits for Resident Evil haha. Anyway Slipknot were just unreal, they haven't lost any of their amazingness or anything they just blew me away, it's the best gig I've been to for years. I'm actually so tempted to buy tickets to Download so I can see them again! Seriously can I just go back and see them again?!