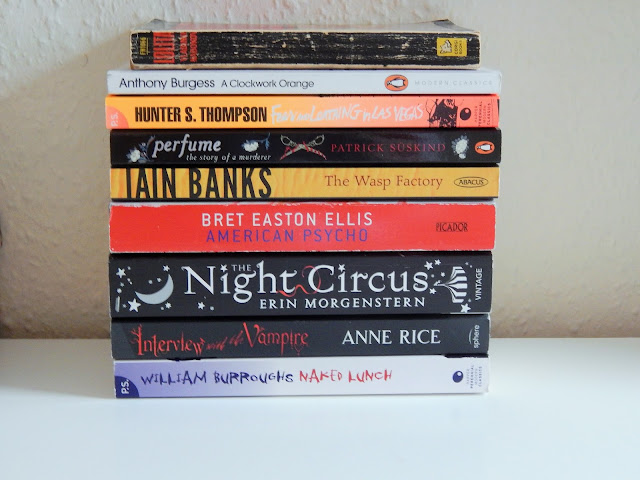 So I have this reeeeally bad habit of starting a book and getting side tracked by another before going back and finishing the original book I started reading. This mostly happens on my kindle however I do have a small pile of books that I sort of just didn't get round to finishing for one reason or another, a few I've read fully but can't remember and re-started yet haven't finished and the others well I got sidetracked or bored. Anyway if I blog about it, I'll do it right? So the aim is to have all these finished by October, I don't really have any distractions bar the kitten and work in my life so I'm sure it'll take me no time! So what's on the list?

Lolita -  Humbert Humbert is a middle-aged, fastidious college professor. He also likes little girls. And none more so than Lolita, who he'll do anything to possess. Is he in love or insane? A silver-tongued poet or a pervert? A tortured soul or a monster?! Or is he all of these?
I read this quite a while back and I can remember certain aspects but not all of it so I've been trying to re-read it for months however I keep putting it down. This books proper well known for been controversial however it is about a man who falls in love with a young girl so you can see why.

A Clock Work Orange - Fifteen-year-old Alex doesn't just like ultra-violence - he also enjoys rape, drugs and Beethoven's ninth. He and his gang of droogs rampage through a dystopian future, hunting for terrible thrills. But when Alex finds himself at the mercy of the state and subject to the ministrations of Dr Brodsky, and the mind-altering treatment of the Ludovico Technique, he discovers that fun is no longer the order of the day
I read this one when I was about 14 and if I'm honest I can't remember half of it so I've been attempting a re-read once again. All I remember is that I was majorly confused by the droog slang ahah.

Fear & Loathing In Las Vegas -We were somewhere around Barstow on the edge of the desert when the drugs began to take hold. I remember saying something like, "I feel a bit lightheaded; maybe you should drive ..."' Hunter S. Thompson is roaring down the desert highway to Las Vegas with his attorney, the Samoan, to find the dark side of the American Dream. Armed with a drug arsenal of stupendous proportions, the duo engage in a surreal succession of chemically enhanced confrontations with casino operators, police officers and assorted Middle Americans.
I think I read the first page of this got sidetracked and watched the movie instead. To be fair though the movie is pretty decent.

Perfume - In eighteenth-century France there lived a man who was one of the most gifted and abominable personages in an era that knew no lack of gifted and abominable personages. His name was Jean-Baptiste Grenouille, and if his name has been forgotten today, it is certainly not because Grenouille fell short of those more famous blackguards when it came to arrogance, misanthropy, immorality, or, more succinctly, wickedness, but because his gifts and his sole ambition were restricted to a domain that leaves no traces in history: to the fleeting realm of scent..


I got caught up with moving and just never went back to it.

The Wasp Factory - Two years after I killed Blyth I murdered my young brother Paul, for quite different reasons than I'd disposed of Blyth, and then a year after that I did for my young cousin Esmerelda, more or less on a whim. That's my score to date. Three. I haven't killed anybody for years, and don't intend to ever again. It was just a stage I was going through.
I'm not a massive fan of the authors writing style which is making it draaaag so bad. Although I hate the guys style, the story is really intriguing and it's making me really want to finish it cause I wanna know what's up with the character.

American Psycho - Patrick Bateman is twenty-six and works on Wall Street; he is handsome, sophisticated, charming and intelligent. He is also a psychopath.
Seriously mate what is with all the details give me some story not description! - Why I got bored. I love the movie of this so I feel like I really should finish the book.

The Night Circus - The circus arrives without warning. No announcements precede it. It is simply there, when yesterday it was not. The black sign, painted in white letters that hangs upon the gates, reads: Opens at Nightfall Closes at Dawn. As the sun disappears beyond the horizon, all over the tents small lights begin to flicker, as though the entirety of the circus is covered in particularly bright fireflies. When the tents are all aglow, sparkling against the night sky, the sign appears. Le Cirque des Reves The Circus of Dreams. Now the circus is open. Now you may enter.
I just got bored, I'd heard so many bloggers raving about it so I thought it's got to be good to be honest I just really couldn't get into it.

Interview With The Vampire - In a darkened room a young man sits telling the macabre and eerie story of his life - the story of a vampire, gifted with eternal life, cursed with an exquisite craving for human blood.
I just keep forgetting to pick it up again. I love the movie and I love Ann Rice so really once I get back to it I'll have no issues finishing it.

Naked Lunch - Meet Bradley the Buyer, the best narcotics agent in the business. Say hello to Dr 'Fingers' Schafer, the Lobotomy Kid, and the sadistic, manipulative Dr Benway. And then there's our narrator, Bill Lee, an Ivy League-educated narcotics addict. This is the story of Bill's flight south from New York to a drug-and-sex-soaked retreat in Tangiers, where ambiguous Good and enticing Evil vie for the human soul. Welcome to Interzone ...
I'm not even sure I finished the first page! Haha.

I'm really excited to get stuck back into all of these and actually finish them before I start all the books I haven't read on my kindle!