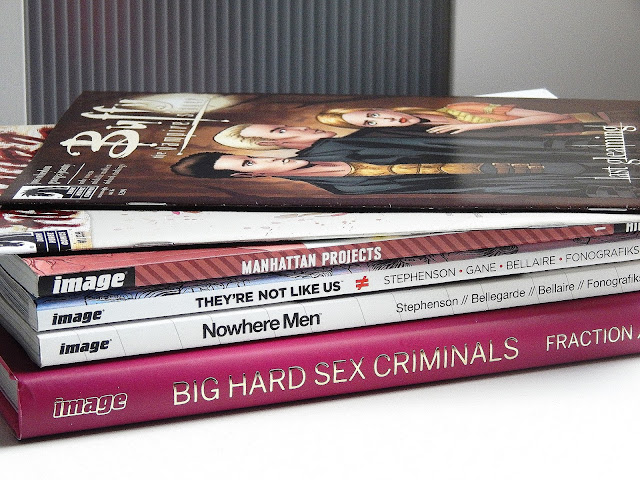 So I decided it was about time I shared what I'd been reading recently as I hadn't wrote a book review in a while however I realised I hadn't read an actual book in a while but mostly comics so I thought why not share those? I'm sure I have some readers who'd be interested. Also it kinda gives you an insight into my geeky side, you probably won't find much DC or Marvel when I talk comics as it seems the only publishers I buy from are Dark Horse or image haha (give or take the odd few). However I do hope it'll inspire you to pick up some new reading material and without further blabbering lets see what I've been reading and what I think! 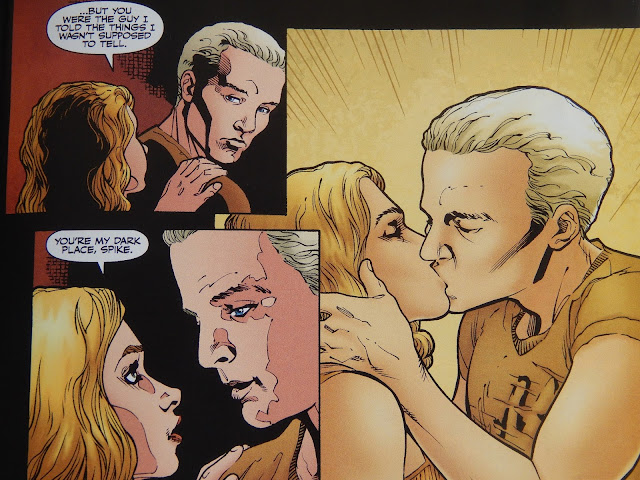 Buffy The Vampire Slayer Season 8 & 9
I have finally got around getting all the issues of season 8 & 9 meaning I obviously binge read them and finished them within a few days. Buffy Season 8 picks up right where the TV series left off, Buffy has created an army of slayers and there's a new 'big bad' on the scene. What I love about the Buffy comics is how many plot twists there are, I also love how it still has it's humor and honestly it is just perfect. Also the art is pretty good, the amount of topless Spike scenes are definitely a plus haha. It's a really easy read for anyone who's a fan of the show or anyone who wants a good supernatural comic series. Season 10 is currently on going but they have library editions so you can easily catch up.
Synopsis - After the destruction of the Hellmouth, the Slayers-newly legion-have gotten organized, but it's not long before new and old enemies begin popping up. Buffy, Xander, Willow, and a very different Dawn are introduced to the season's big bad, Twilight, and are only beginning to understand the incredible reach of this mysterious threat. Meanwhile, rebel Slayer Faith teams up with Giles to handle a menace on the other side of the Atlantic. It's a dirty job, and Faith is just the girl to do it! 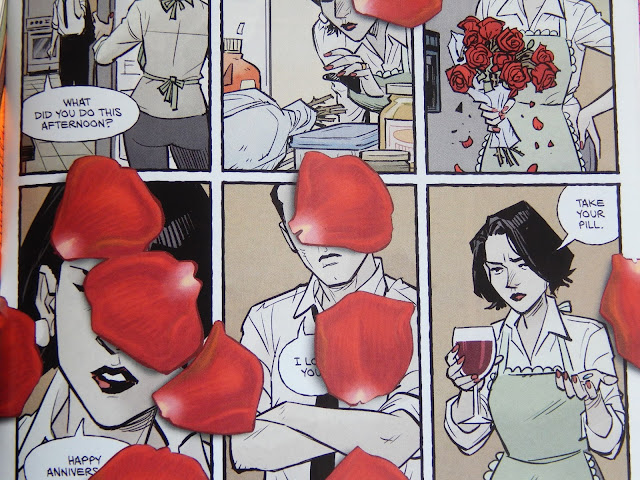 When I found out Chuck was writing a sequel to Fight Club in comic form I knew I couldn't pass it up, currently I'm still pretty confused as to what is going on but I felt this way about the book for while & had to re-read it. It has Palahniuks usual style, it's told from Tyler's perspective as he tries to break free and cause chaos once again, it's brilliant. The characters are just as you remember them and I'd recommend it to anyone who wants something different to super hero comics or super natural ones, as it's pretty gritty and has a few twists and of course it's confusing as ever but hey following a character with multiple personalities is never going to be easy is it?
Synopsis - Some imaginary friends never go away . . .
Ten years after starting Project Mayhem, he lives a mundane life. A kid, a wife, pills to keep his destiny at bay. But it won't last long; the wife has seen to that. The time has come . . 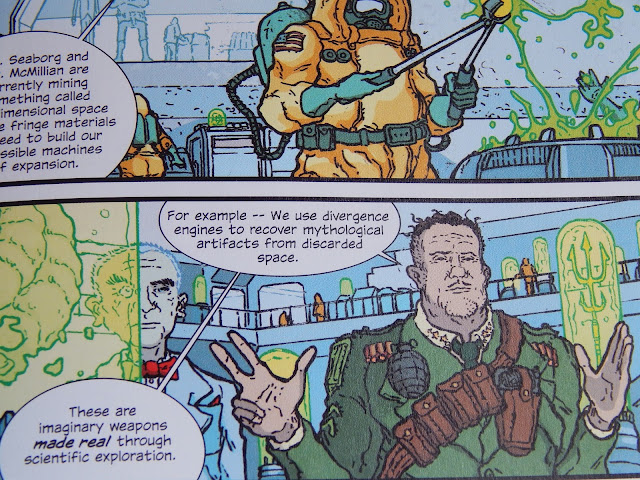 Manhattan Projects #1 Science Bad
I can honestly say I have no idea what to say about Manhattan Projects to be honest! It left me utterly confused however I really enjoyed reading it. I'm definitely going to stick with it and get the second trade when I get chance. The story is about an alternative ending to the second world war, by focusing on the Manhattan Project and how it is a front from much more science fiction based research. This research involves aliens, Einstein and more. It was a little weird and messed up but I've realised that is my comic style. I don't really know what to say about this really, aside from it was really good but I definitely need to read the others to understand it I think. I do love that there's loadsa 'history' in it though and Einstein is such a good character aha.
Synopsis - 'Science. Bad.'
What if the research and development department created to produce the first atomic bomb was a front for a series of other, more unusual, programs? 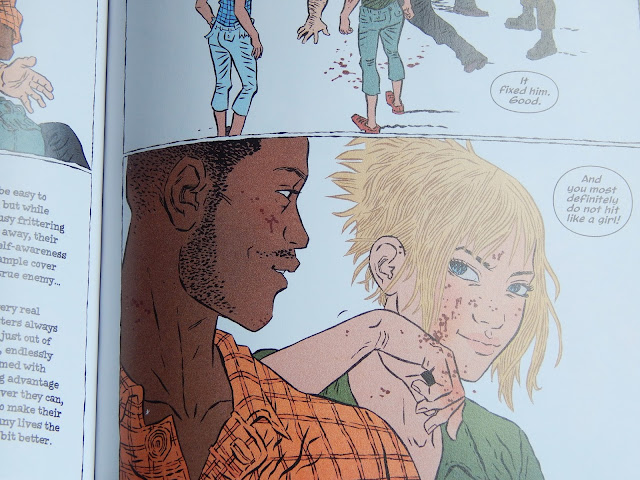 They're Not Like Us #1
I picked this up on a whim, the cover art looked somewhat familiar and really didn't have any clue what it was going to be like but I was instantly hooked, I wish I could be bothered to find the last few issues so I don't have to wait for the next trade to come out. I really liked the art in this and I love the story, I love that there's something different about each character and that they all live together but what exactly is their purpose? It's I don't know how to describe it but, it was definitely gripping. Good art and a gripping story line is something you don't want to miss out on.
Synopsis - Generation after generation, it's the same old S.O.S.: There's no hope for the future, because young people think only of themselves.They have no respect for authority. They think they know everything. They are arrogant. They are reckless. They want to tear the world apart. In a time full of possibilities, yet rife with disappointment, the youth are changing. They look the same, but they act different, think different, and have abilities we can only dream of.They're not like us. 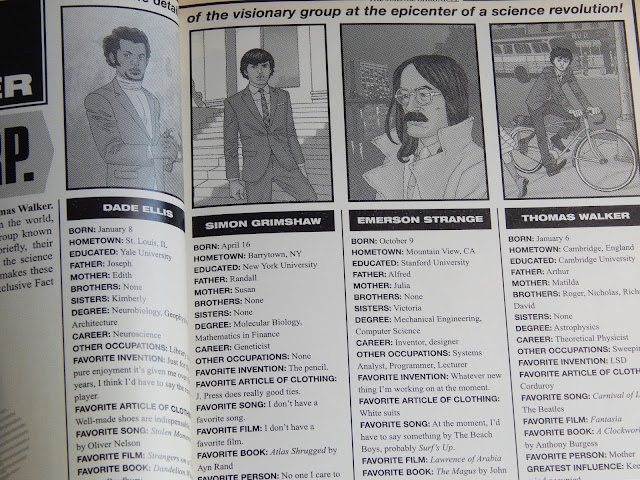 Nowhere Men
After a million and one recommendations I picked this up the second I spotted it in my local Forbidden Planet. Any story to do with science and I am sold, I love the science aspect of this comic but I love that it's tag line is Science is the new Rock & Roll. It's kinda what sold me. First up I really like the art in this and the story is fantastic, definitely one of the best things I've read in a while. But what I really loved were the 'news/magazine' article type bits that gave more background and depth to the characters and what was going on. The ending kind of left me a bit confused but I'm finding that this is a little bit of a regular occurrence with comics so I'm probably just a bit special. If you want something different go get this honestly you won't be disappointed.
Synopsis - "Science Is The New Rock 'N' Roll!" So said Dade Ellis, Simon Grimshaw, Emerson Strange, and Thomas Walker at the dawn of a new age of enlightenment that ushered in a boom in scientific advancement. As the research supergroup World Corp., they became the most celebrated scientists of all time. They changed the world and we loved them for it. But where did it all go wrong? And when progress is made at any and all cost, who ultimately pays the price? 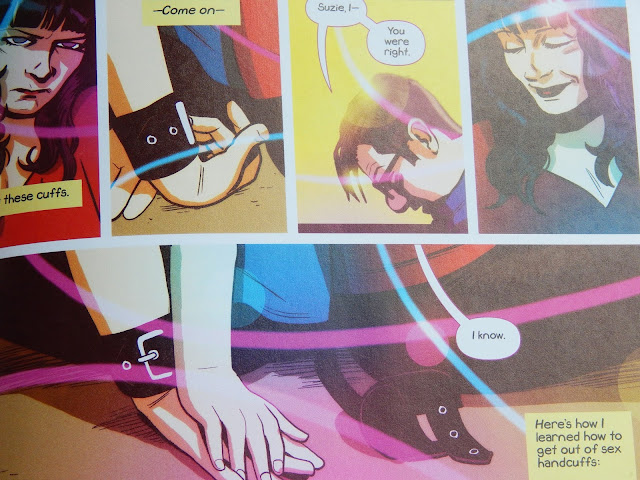 Big Hard Sex Criminals
This is by far one of the best things I've ever read, it is so fucked up I can't deal with it but oh
man I absolutely love it. One of my best friends recommended it and I looked at him like mate that sounds like the most fucked up story line ever, however a few pages in and I couldn't put it down. I love the art too, the art for 'cumworld/the quiet' is so pretty with all the colour swirls and stuff. I also love the background details in the art, artwise this is one of my favourites. To be honest I just absolutely love everything about it, even the letters are amazing oh and the sex tips will have you crying with laughter. One of the best series I've read in all honesty, I actually recommend it to everyone! It sounds odd, it is odd but oh man you will be crying with laughter and the story is great.
Synopsis - Suzie's just a regular gal with an irregular gift: when she has sex, she stops time.One day she meets Jon and it turns out he has the same ability. And sooner or later they get around to using their gifts to do what we'd All do: rob a couple banks. A bawdy and brazen sex comedy for comics begins here!