Halloween Make Up, with HQ Hair.

You may have seen on Instagram/Twitter that I dressed as Poison Ivy for Halloween, it would be rude not to have, to be honest considering the colour of my hair! I'm a really bad blogger though and a) forgot my camera and b) didn't take step by step photos. Also I know Halloween was like 3 days ago now but, I've been real busy annnd my make up can be done at any time of year, since it's Poison Ivy. This post does contain two looks, my Poison Ivy One and my best friend Brandon's dead person/zombie make up which I gave him a hand with. I have to say considering we all did our make up in a rush and finished our costumes last minute we didn't look too shabby. 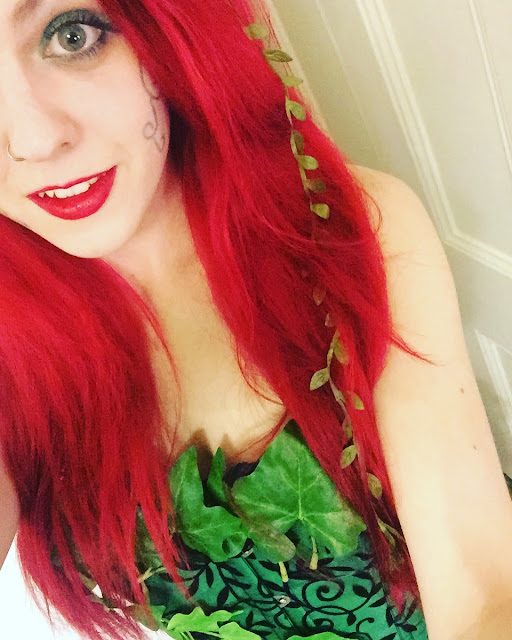 It was actually a lot easier than I anticipated to do make up that I was happy with. I did my base obvs, then covered my eyes in the lighter green shadow before going over the bottom half with the darker. I used the Rimmel smoke and shine on my lash and water lines and the edges of my eyes, I did go over these with a bit of green just to give it a little colour. Using the green eyeliner I just randomly drew 'swirly' bits down my face as if it was ivy, I went around these in the water proof eyeliner just to give it some definition.
I was proper amazed at how well everything stayed on, I'm always skeptical about eyeliner however none of this smudged and I still looked fresh at the end of the night! Which is a miracle in Sugar Cubes since it is the hottest nightclub EVER. 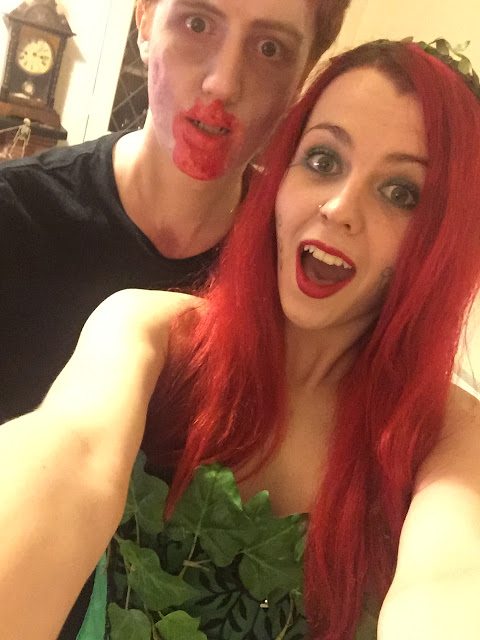 For Brandon's face we watched a Youtube tutorial, I won't lie I am shit at following directions and didn't do a good job of it so Brandon ended up taking over and finishing it off making it look better. We made his face white because he's dead obvs. We then started on his bruises, to do this we used the lipstick and smudged it before putting black eyeshadow over it. The lipstick is the most beautiful shade of purple ever. We defined some of his neck and chest bones with the shadow and liquid eyeliner however you can't see it on this photo haha. For his eyes we put a bit of lipsticks on them and smudged before going over with white facepaint and some black liner/shadow.

This isn't exactly the greatest Halloween make up guide as I suck at giving directions and taking photos. However I hope it helps/inspires you with costume make up! Thank you to HQ Hair for the products also!
K. x
follow me on Bloglovin', Instagram, Twitter &Lookbook