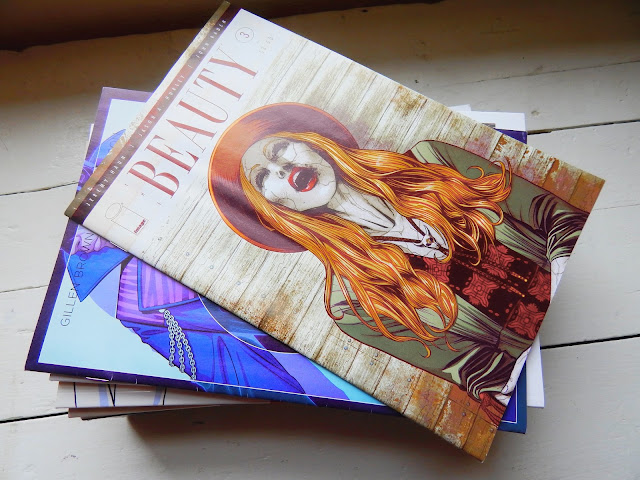 So it's been a while since I shared any book reviews so kick it back off I thought I'd share some comics I've read recently, well over the past few months. This little stack made me realise I've really got to start reading things by other publishers because all I have is Image or Dark Horse haha. I've definitely picked an odd selection to share with you all, each other these comics are so different to each other.


The Beauty
First of all how beautiful is that cover?! I found Issue one while browsing Forbidden Planet, I was instantly drawn in by the cover art and after that I was completely sucked in and love it. The first arc is 6 issues long and just finished in January and I honestly cannot wait for it's return to see where it's going. The story is pretty fast moving and the only way I feel I can describe is like a sexy crime drama maybe? I don't want to give too much away since the story is currently only 6 issues long, so all I'm going to say is if you like drama, crime and a fast paced story this is for you.
Synopsis - Modern society is obsessed with outward beauty. What if there was a way to guarantee you could become more and more beautiful every day? What if it was a sexually transmitted disease? In the world of The Beauty, physical perfection is attainable. The vast majority of the population has taken advantage of it, but Detectives Foster and Vaughn will soon discover it comes at a terrible price.

The Wicked And The Divine
How can you not want to read this series once you read that synopsis answer me that haha. I read the first two story arcs last year and instantly loved them, the characters are amazing. They're all so different and you want to know more about them which is great cause Commercial Suicide pretty much explores characters further which is fab. The third arc also features a lot of guest artists which kinda put me off at first since I love the original art buuuut the story is far too good not to keep reading. A lot of the dialogue is kinda meaningful stuff and the characters pretty deep too. It's a good series to start with if you want a bit of fantasy or something a little deeper.
Synopsis - Every ninety years, twelve gods incarnate as humans. They are loved. They are hated. In two years they are dead.

Alex + Ada
This one broke my heart a little, when I need something new to read I always ask one of my best friends as he has amazing taste in comics and is pretty much to blame for half my reading list. Anyway he said this was something I'd really enjoy I was a little skeptical as it had an iRobot sort of feel to it from the premise/synopsis but I trusted him and oh man I'm so happy I did. I read all of them in about 24 hours and had a few tears when I finished, the story was beautiful. I actually just loved everything about this, the story, the characters, the art EVERYTHING. I actually loved it, I'm considering re-reading it as I write this because it was just so perfect. It left me feeling empty though, sad and just I can't describe it without ruining the story but it just left me heart broken I guess. If you read any on this list it has to be this one. It's dramatic, it has romance, it has suspense it's just everything.
Synopsis - Alex + Ada a sci-fi drama set in the near future. The last thing in the world Alex wanted was an X5, the latest in realistic androids. But after Ada is dropped into his life, he discovers she is more than just a robot. 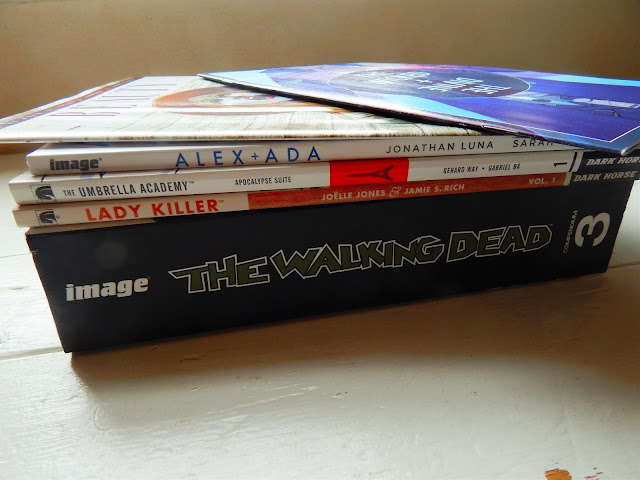 The Umbrella Academy
This is probably my least favourite on the list, I remember when Umbrella Academy first came out and I wanted to read it more than anything yet couldn't find it anywhere after the paperback was released I struggled to find that. So Emo 14/15 year old Kloe gave up flash forward many years and wandering about forbidden planet my eyes happen to fall up on it at last. Without a second thought I bought it, I have to say Gerard Way should stick to writing music not comics, this just left me slightly like 'eh' I had several unanswered questions and I don't know it was just odd. Saying that though it was an entertaining read and I'll definitely read more of Gerard's work since he's currently writing a new one...But yeah if you want to satisfy your inner emo I'd say you need these, the art work is pretty good the funeral scene is my fave.
Synopsis - Once the Umbrella Academy was unstoppable. Under the tutelage of their guardian and mentor, Dr. Reginald Hargreeves, its members spent their childhoods fighting evil and honing their extraordinary gifts. Until something went terribly wrong... Now nine years later, the estranged members of the Umbrella Academy are reunited by the death of the only parent they've ever known and the rise of a new and terrible threat. Will they be able to overcome their history for long enough to save the world one more time?

Lady Killer
I was sucked into this one by the review which said it was like Mad Men's Betty Draper meets Dexter, how can you read that and not be intrigued? I love the idea of house wives with double lives and that's exactly what this comic is about. Josie is a babe, I want to be her. One thing I love about this comic is the fashion, it probably sounds odd but 1950s style is beautiful, the amount of detail in all the scenes is brilliant. There's not as much text in this one as I'm used to but I was happy with that since the scenes were so pretty I wanted to examine them more than read. The story itself is a good one though you quickly have many questions about Josie's life and worry about her husband finding out, it's all a bit dramatic and I love it. The paperback is short and sweet with only five issues so it's a good one for anyone who wants something quick and new to read. Be warned though you may end up wanting to be a house wife with a double life.
Synopsis - Josie Schuller is a picture-perfect homemaker, wife and mother -but she's also a ruthless, efficient killer! She's balanced cheerful domestic bliss with coldly performed assassinations, but when Josie finds herself in the cross hairs, her American Dream life is in danger.

The Walking Dead
After starting these about 6 years ago and only getting as far as paperback 5 I have finally gotten around to read all of TWD and I swear spending 4 weeks reading nothing but was definitely worth it. Once I caught it I felt like my life had lost it's purpose. I love how different the characters are in the comic to the show, and the pace is brilliant. The pace oh my god, swear down I'm just starting to feel a bit better and think Rick and the gang might be ok 5/6 pages later and oh no we're fucked again. Haha. I can't actually describe how much I enjoyed reading this, it was literally all I could think about when I wasn't reading it. Like what was going to happen next? The story was so gripping, sometimes the show bores me a little bit but the comic is great because we don't just have our main group but there's more focus on others and I like the back and forth between events of different characters. I also find comic book Rick a much better character a kinda hot in a weird way haha. If you want something to binge read, it's got to be this. I couldn't put it down, the story is a solid one and even 151 issues in and I am no where near bored or wondering if it'll ever end because good writing is forever being produced. Oh and the art is fab, some of the gory scenes are kinda haunting I love it.
Synopsis - An epidemic of apocalyptic proportions has swept the globe, causing the dead to rise and feed on the living. In a matter of months, society has crumbled: There is no government, no grocery stores, no mail delivery, no cable TV. Rick Grimes finds himself one of the few survivors in this terrifying future. A couple months ago he was a small town cop who had never fired a shot and only ever saw one dead body. Separated from his family, he must now sort through all the death and confusion to try and find his wife and son. In a world ruled by the dead, we are forced to finally begin living.

I don't really know how helpful my reviews are because all I do is gush about stuff and say what I liked about it in a super vauge way. I think it's because I hate giving loads away about books as I'm worried I'll give too much away and ruin a story haha. I do however enjoy writing my silly little reviews so I'll probably keep doing it. Be prepared though my next comic one will probably contain me fan girling over Buffy since Season 10 is ongoing haha.

I hope I've given you some insight into the world of comics and maybe given you some inspiration for new reads? If you have any comic recommendations please send them my way!
K. x
follow me on Bloglovin', Instagram, Twitter &Lookbook